Rhea was born in 1996 in Adelaide, South Australia. She celebrates her birthday on 11th October, which makes her age 24. Her real name is Demi Bennett. She holds Australian nationality and comes from Caucasian ethnicity.

Rhea started her career in Riot City Wrestling in 2013. After few years in the independent circuit, she signed with the WWE in 2017 and was announced to compete in the inaugural Mae Young Classic. Although she emerged victorious in the first round, she lost to Dakota Kai in the second round. She made her NXT debut on 25th October 2017. She became part of the NXT UK brand in 2018, after which she became the NXT UK Women’s Champion. 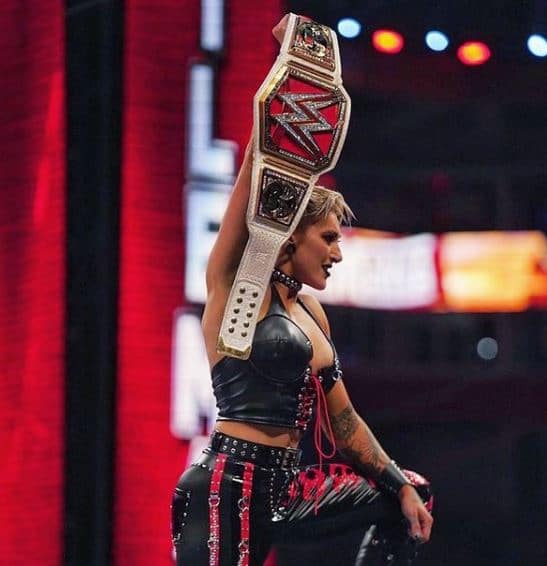 However, she lost the title after 139 days to Toni Storm. On 22 March, she made her main roster debut on Raw. She confronted Asuka to a match for the Raw Women’s Championship at WrestleMania 37. The match will take place on Night 2 of WrestleMania on 11 April. As of 2021, Rhea Ripley is estimated to hold a net worth of $1.5 million.

Moreover, she also shared a post for Valentine Day writing,

Nonetheless, the pair have shared no plans of a wedding as of now.

Rhea has not been much open when it comes to sharing about her family. Moreover, she has also not shared the names of her parents.

However, she has featured them on a post where every member of her family wore the NXT championship belt. Regardless, she also has a sister named Calista Bennett.

Rhea has a height of 5 feet and 7 inches. She weighs 62 kg. As a wrestler, she has mentioned a fit and muscular body. She possesses blonde hair and gray eyes.