Originally from the United States, Rich Paul was born on December 16, 1981, under the star sign Sagittarius. The 40-year-old sports agent is American by nationality and belongs to the African-American ethnicity. He attended Benedictine, a Roman Catholic high school in Cleveland, Ohio.

Rich Paul Net Worth and Salary

At the age of 19, Paul bought his first house and was mentored by Distant Replays owner Andy Hyman on selling vintage jerseys. He then started selling jerseys out of his trunk in Cleveland, making $10,000 on a good week. 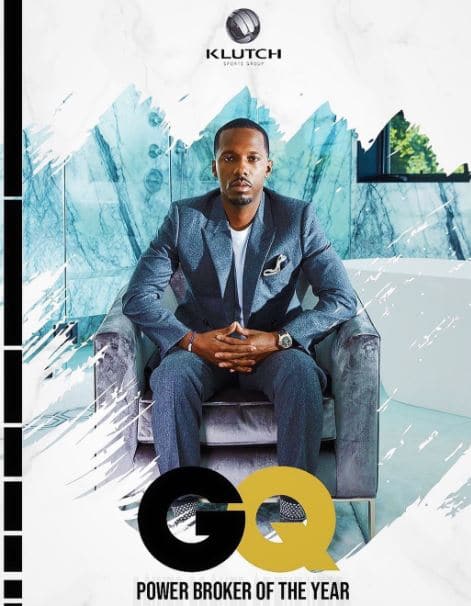 Paul worked under LeBron James and Leon Rose before starting his own agency, Klutch Sports Group, in 2012. Mark Termini, a long-time agent, and attorney was appointed to run the NBA contract negotiations for Klutch. From 2014 through 2019, Termini negotiated $1.4 billion in NBA contracts for Klutch Sports clients.

In 2019, United Talent Agency had Paul run its sports division through a partnership with Klutch. He accepted a position on UTA’s board of directors in 2020. The same year, he launched “Klutch Conversations” to encourage financial literacy in youth. He was included in the 2020″Ebony Power 100 List.”

Paul manages 20 NBA players and is known to be one of the most powerful agents. Over the years, he has managed to grow his team as he pooled in more players. He has established himself as one of the richest sports agents. As of 2022, Paul has a whopping net worth of $120 million.

In 2021, Paul sparked dating rumors with Adele. He was the new addition to Adele’s rumored relationships.

Rich Paul was first spotted with the Grammy winner Adele, in July 2021, attending the NBA Finals. US Weekly reported that the duo had been dating for months before making a public appearance. Since then, the beautiful couple has been in a good romantic relationship.

Recently, in June 2022, it is revealed that Rich and Adele have been thinking about starting a family together.

Paul was once a married man. He shares a young, beautiful daughter, Reonna Paul, with his ex-wife.

Paul grew up in a one-bedroom apartment above his father’s store, R & J Confectionery, on East 125th and Arlington in Glenville. He lost his father in 1999 to cancer.

Paul stands tall at the height of 6 feet 1 inch. He has a well-maintained, fit body that weighs around 76 kg. He has black hair and dark brown eyes.

How old is Rich Paul?

Who was Rich Paul’s first client?

Rich’s first and the biggest client is LeBron James, whom he met in 2002.

How much does Rich Paul earn?

Rich earns around $30 million each year as commission.

What is Rich Paul’s net worth?

How did Rich Paul and Adele meet?

In an interview with Vogue, Adele revealed that Rich and Adele met at a party where she joked about him and that he should sign the contract as a client.

Rich was married once and divorced, but hasn’t revealed her identity.

Who is Rich Paul’s girlfriend?

Rich is dating his girlfriend, Adele.

Are Adele and Rich Paul still together?

Adele and Rich have been dating for over a year now, and both are thinking of starting a family together.

How tall is Rich Paul?