Ricko DeWilde is an extreme survivalist, hunter, and television reality star who is one of the stars of Nat Geo’s Life Below Zero. Unlike other people, he has chosen to live in a remote area where below-freezing temperatures are the norm. The Native American rights activist is on his way to reflecting the strength and beauty of the Native American lifestyle.

Originally from Huslia, Alsaka, Ricko DeWilde was born on June 7, 1975, under the star sign Gemini. The 48-year-old hunter is American by nationality and part of Athabascan Indian ethnicity. He, along with his siblings, was home-schooled and didn’t attend a traditional school until he was a senior in high school.

Ricko DeWilde Net Worth and Salary

The survival expert and hunter made his TV debut in the eleventh season of Nat Geo’s hit reality show Life Below Zero in 2018. Since then, he has been a regular cast of the series and has appeared in over 35 episodes. Besides, he is a founder of a clothing line called HYDZ Gear. 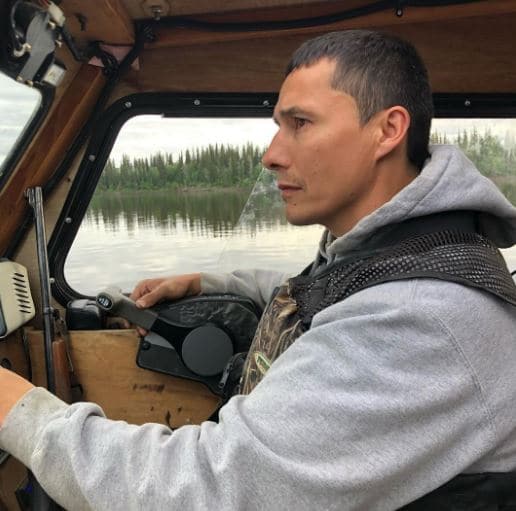 Thanks to his splendid hunting skills, the survivalist has continued earning relatively well and is now worth hundreds of thousands of dollars. As of 2023, DeWilde holds an estimated net worth of $250 Thousand. However, his salary from the show remains undisclosed.

Despite his proclivity for solo adventures, the native American rights activist is very much a family man. He has a partner with whom he shares five children.

Though it’s unclear whether DeWilde is married to the mother of his five kids, Rona Vent, the reality star spends his time in the city of Fairbanks with Rona, his sons Skyler and Keenan, and daughters Simone, Maya, and Skarlett.

Both Ricko and his partner, Rona, are Koyukon Athabascan, a group of people named after the territory they occupy along the Koyukuk and Yukon rivers. The couple is raising their children in Fairbanks. Meanwhile, DeWilde desires to pass down the Native Alaskan traditions, which he learned from his parents to his five kids.

The star of National Geographic’s Life Below Zero was born to his parents Lloyd and Amelia DeWilde. He spent the first 18 years of his life alongside his 13 brothers and sisters, hunting trapping, and fishing in the region of Koyukuk and Yukon rivers. He, along with his siblings, was home-schooled and grew up in their camps.

In 2016, DeWilde’s family became a topic of national conversation after his older sister, Riba, was hot in her Tok Home. His parents have also passed away.

DeWilde has tall height with a medium build athletic body. He stands at a height of 6 feet and weighs around 75 kg. He has short black hair and brown eyes.

How old is Ricko DeWilde?

Where is Ricko DeWilde from?

What tribe is Ricko DeWilde from?

Ricko DeWilde is from the Koyukon Athabascan tribe.

What is Ricko DeWilde net worth?

Who is Ricko DeWilde's wife?

Ricko DeWilde is married to Rona Vent as per the report.

How many children does Ricko DeWilde have?

How tall is Ricko DeWilde?