Only a few might have a successful debut as Sasha Lane. The actress made her debut at the young age of 20 and played the lead role in the 2016 movie American Honey where she starred alongside well-known actors. Since then, the actor has made many notable appearances and also won the British Independent Film Awards for her debut performance. Likewise, she has many of her fans excited as she will be appearing in the 2021 series, Loki.

Sasha Bianca Lane was born in 1995 in Houston, Texas. She celebrates her birthday on September 29, which makes her age 25 and zodiac sign Libra. She holds an American nationality and comes from mixed ethnicity including African-American and Maori. She had attended Texas State University before dropping out.

Sasha had her successful film debut in the critically acclaimed and award-winning American Honey in 2016. She starred alongside actors such as Shia LaBeouf and Riley Keough. The film premiered on May 15, 2016, at the Cannes Film Festival and won the Prix du Jury. Besides her successful debut, the actress has also starred in other movies such as the Maelstrom, Hearts Beat Loud, and The Miseducation of Cameron Post.

In 2019, the actress played the role of Alice Monaghan in Hellboy and also appeared in the horror-thriller film Daniel Isn’t Real in the same year. In 2020, Sasha starred in an episode of Amazing Stories and Utopia. Moreover, the actress is also set to appear in the hugely anticipated Disney Plus show, Loki, in 2021. As of 2021, Sasha Lane is estimated to hold a net worth of over $500k.

Sasha’s dating life made headlines when the actress was in a relationship with her co-star Shia LaBeouf. The duo had met in the set of American Honey and soon sparked romance. The pair were spotted several times and had reportedly moved in together. However, the pair broke up for some unknown reason and are no longer together as Shia had later the knot with another actress Mia Goth.

On the other hand, Sasha came out during the promotion of her 2018 film, The Miseducation of Cameron Post, during the Sundance Film Festival press junket. She came out as gay. In a 2020 interview, the actress had shared that she had found someone but hesitated to share the details of her partner.

““I know I have found this person…but I don’t necessarily want to say who. I need a person who can feel good in their space as well as I do in my space.”, she shared.

Sasha comes from an interracial family. She was born to an African-American father and a mother of Maori descent. Unfortunately, her parents divorced when she was young. The actress lived with her mother. Nonetheless, she also has a brother, Sergio Darcy Lane. 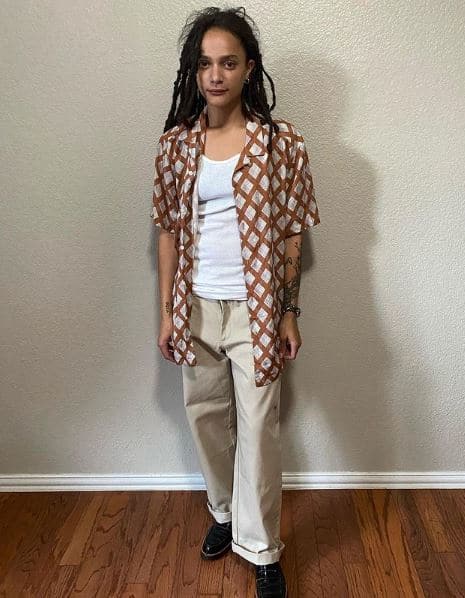 The beautiful actress has a height of 5 feet and 4 inches. She has a stunning and slim-built body. The actress possesses stunning dreadlock brown hair and attractive black eyes.