Scooter Braun is the quintessential entrepreneur of the millennial generation. He is the founder of Schoolboy Records and Ithaca Ventures and co-owner of esports team 100 Thieves. In July 2021, he filed for divorce from his wife of six years.

Originally from New York City, U.S., Scott Samuel Braun was born on 18 June 1981 under the star sign Gemini. The 40-year-old media proprietor is American by nationality and belongs to the Jewish ethnicity.  He attended Greenwich High School and later joined Emory University in Atlanta but dropped out of college before completing his degree.

Braun is the founder of SB Projects, an entertainment and media company with ventures at the intersection of film, television, music, technology, social good, and cultures. He has managed several top pop culture icons including Kanye West, Justin Bieber, Usher, Karlie Kloss, and Ariana Grande to name a few.

Braun made waves in the film industry with his first documentary film Never Say Never in 2011. He was also an executive producer for the CBS drama Scorpion. In 2018, he joined the founding chairman of Marvel Studios, David Maisel, to form Mythos Studios. The studio produces comic-book movie franchises in animated and live-action formats.

Braun’s holding company, Ithaca Holdings, has invested in Uber, Spotify, Casper, Songza, Waze, and Pinterest among others. Hybe, a South Korean company, has offered a deal to acquire Ithaca Holdings from Braun at around $1 billion. As part of the deal, Braun will become the CEO of Hybe America and join Hybe’s board of directors. 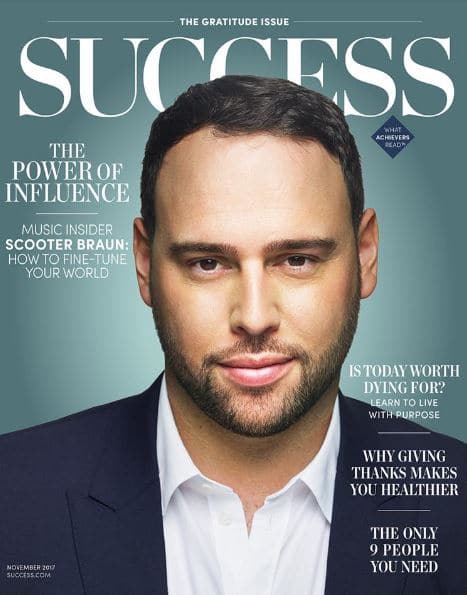 Braun has dominated the music industry as a manager and investor for years. His empire that includes artist management, song catalog investments, and more, have paid him hundreds of millions of dollars. As of 2021, his net worth is estimated at $400 million.

The pair share three children. They welcomed their first child on 6 February 2015, second child on 29 November 2016, and a third child, first daughter, on 1 December 2018. In July 2021, Braun filed for divorce from his wife of seven years. But they are committed to co-parenting amid divorce.

The record executive was born to Jewish parents, Ervin and Susan Braun. His parents fled to the United States from Hungary in 1956. His father was a dentist, and his mother was an orthodontist. He grew up in Cos Cob, Connecticut with his four siblings – Adam, Sam, Cornelio, and Liza.

Braun stands tall at the height of 5 feet 11 inches. He has a well-maintained, fit body that weighs around 175 pounds. He has light brown hair and dark brown eyes.