Sebastian Coltescu is a Romanian referee who is mostly known for his controversial decisions and dark moments. Recently, he got accused of making alleged racist comments to Istanbul Basaksehir’s assistant manager, Pierre Webo, during their game against Paris Saint-Germain on 08 December. He will face at least a 10-match ban if found guilty by a UEFA disciplinary investigation.

Originally from Craiova, Romania, Sebastian Coltescu was born on 06 May 1977 under the star sign Taurus. His birth name is Constantin Sebastian Coltescu. The 43-year-old referee is Romanian by nationality and belongs to the white ethnic group. He is fluent in English and Romanian language.

Coltescu’s career as a referee took off in 1996. He made it to the four-star category of refereeing in 2006. Following a series of controversial performances, FIFA relegated and demoted him to the Romanian second division in 2007. However, he returned to the top stage of referring in 2008.

As a head referee, Coltescu managed only a single game between Kairat Almaty and Siroki Brijeg in the first qualifying round of the Europa league in 2020-21 season in Europe. In November 2020, he referred the match in UEFA Youth League between Galatasaray and Atletico Madrid and served as the fourth official in the Champions League match between Real Madrid and Shakhtar Donetsk. 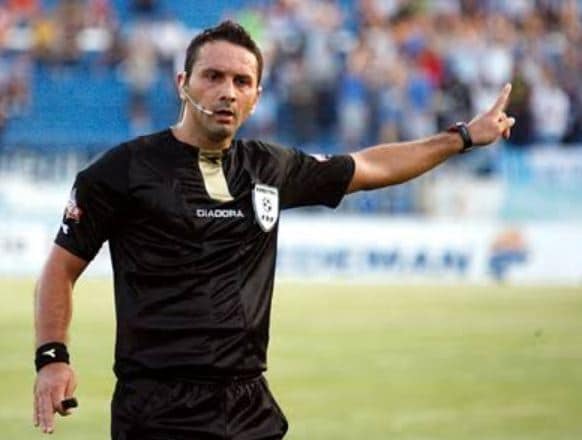 On 08 December 2020, he sparked controversy during a Champions League game between Istanbul Basaksehir and Paris Saint-Germain. He referred to Istanbul Basaksehir assistant coach Pierre Webo as “that black guy,” which led to the game being abandoned by players from both teams. He was also at the forefront of a number of controversial decisions in a game between Gaz Metan Medias and FCSB in Romania in November last month.

According to some sources, referees selected for Europa League, Champions League or International matches reportedly earns a basic salary between $93,648.45 to $267,567 a year plus a $2,007 match fee. Besides, he works as an engineer outside of football from where he earns a decent salary. As of 2020, Coltescu’s net worth is estimated at $600 Thousand.

Whenever Coltescu makes headlines, it’s only for bad reasons. Many football fans probably hate him, and his recent racist remarks have raised the hatred even more. Hence, Coltescu tries his best to keep his family out of public scrutiny and hatred.

As Coltescu is already in his 40s’, he is probably a married man with a family. However, no information has been surfaced about his possible wife and children.

The fourth official hasn’t revealed anything about his family background, the identity of his parents and his siblings.

Coltescu has an average height of 5 feet 8 inches. He has a slim, fit body that indicates he has maintained his body weight quite well. He has light brown hair and brown eyes.