Sepp Kuss is a professional cyclist who rides for UCI WorldTeam Team Jumbo-Visma. Likewise, he has been making headlines after winning a stage of the Tour de France. He is the first American to win since Tyler Farrar, who won Stage 3 in 2011. Besides, he had won two races at the Collegiate Mountain Bike Nationals and another win on a summit finish stage in the Redlands Bicycle Classic.

Sepp Kuss was born in 1994 in Durango, Colorado. He celebrates his birthday on September 13, which makes his age 28. He holds American nationality and comes from White ethnicity. Sepp attended the University of Colorado.

Sepp started mountain bike racing as a junior and won two races at the Collegiate Mountain Bike Nationals in 2014 and 2015. After racing for the amateur Gateway Harley Davidson / Trek Team, he had his first win on a summit finish stage in the Redlands Bicycle Classic. He later joined LottoNL-Jumbo on a two-year contract. He rode in the 2018 Vuelta a España and the 2019 Giro d’Italia. After getting his first grand tour stage win in stage 15 of the 2019 Vuelta an España, he finished 15th overall in the 2020 Tour de France.

It was also the highest overall placing for an American since Andrew Talansky in 2015. He again supported Roglic’s winning ride in 2020 Vuelta an Espana. In 2021, Sepp won stage 15 of the Tour de France. He maintained his lead ahead of Spaniard Alejandro Valverde in the 15 km that followed the pass. He became the first American to win a stage of the Tour de France in 2011. As of 2022, Sepp Kuss holds a net worth of $3 million.

Sepp has been making headlines since his last win in Tour de France. Likewise, many of his fans are interested to know if the cyclist is dating anyone or has a girlfriend. Sepp is in a relationship with his beautiful girlfriend, Noemi Ferre. The pair have been dating since September of 2019. Likewise, his girlfriend has appeared in many of his Instagram posts. Moreover, she can also be seen supporting him during his races.

In September of 2020, Sepp took to Instagram to celebrate his first anniversary with his girlfriend. For the caption, the cyclist wrote,

“One year with this girl 🐥 @mminoe ❤️You make me the happiest fella around, and fill me up with laughter, adventure, biiig steaks, and love. I love you Noemita!!”

Besides, in November of 2020, the pair celebrated Noemi’s 29th birthday together, and a month later, they spent time together for Christmas. Regardless, there is no news of the pair tying the knot as of now.

Sepp was born to his supportive parents, Dolph Kuss and Sabina Kuss. His parents and expert skiers and mentors of the sport. Sepp’s mother has been working as a teacher for The Nordic Center in Durango. His father was the U.S. Nordic ski team coach during the 1960s and 70s and a former coach at Fort Lewis College. 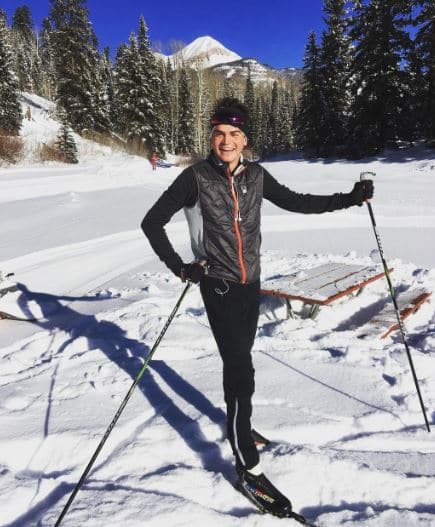 Sepp has a height of 5 feet 11 inches. Likewise, he has a slim and fit body that weighs around 61 kg.

Where is Sepp Kuss now?

Who is Sepp Kuss' father?

Dolph Kuss is the father of Sepp Kuss.

How old is Sepp Kuss?

Where is Sepp Kuss from?

Who is Sepp Kuss' wife?

Sepp Kuss is not married and does not have a wife as of 2022.

Who is Sepp Kuss' girlfriend?

What is the net worth of Sepp Kuss?

How tall is Sepp Kuss?