Sergi Canos is a professional footballer who plays as a winger for Premier League club Brentford. He also adopts as a forward or an attacking midfielder. He has represented Spain between U15 and U19 levels.

Originally from Nules, Spain, Sergi Canos Tenes was born on 2 February 1997 under the star sign Aquarius. The 24-year-old footballer is Spanish by nationality and belongs to the Hispanic ethnicity. He is a Barcelona graduate.

Canos began his football career at his hometown youth club, Nules. He then joined Barcelona’s academy in 2010. Three years later, he signed for Premier League club Liverpool at the age of 16. He played in every match of Liverpool’s 2014-15 UEFA Youth League campaign and scored one goal. 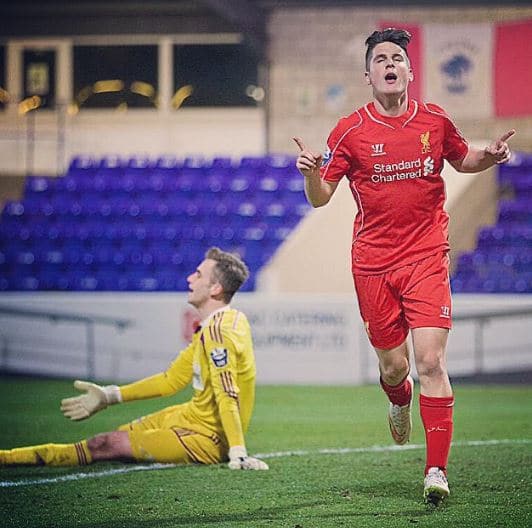 Canos was on loan at Brentford in the majority of the 2015-16 season. He finished the season with seven goals from 39 appearances for Brentford. He departed from Liverpool on 12 July 2016. On 13 July 2016, he signed a four-year contract with Championship club Norwich City.

The right-winger returned to Brentford on 31 January 2017, signing a four and a half year contract. He finished the 2016-17 season with four goals from 18 appearances. He had a frustrating 2017-18 season as he only scored three goals in 31 appearances. In October 2019, he signed a new four-year contract with Brentford. He made 15 appearances in the 2019-20 season.

The Spaniard earns £16,538 per week, £860,000 playing for Brentford as an AM RL. He also makes tens of thousands of dollars from endorsements and promotions. As of 2021, Canos has an estimated net worth of £1.5 million.

The Brentford star is currently in a romantic relationship with his girlfriend, Valeria Emiliani. His girlfriend is a Colombian actress and pop singer, best known for her role in the Netflix original series Siempre Bruja.

The 24-year-old Canos hasn’t unveiled much about his relationship with Emiliani. However, in an Instagram post, he revealed that he would never understand how two people could love each other until he met the love of his life, Emiliani.

It’s unclear when and how the couple started dating. But the two have been together since at least April 2020 as Emiliana made her relationship with Canos Instagram official on 19 April 2020.

Canos hasn’t revealed much about his family members and parents. His father’s name is Pepe. His family ran a Spanish restaurant, Gracias, in Liverpool.

He has a younger sister, Judit, with whom he has a very close relationship. His mother and sister still live in Liverpool.

Canos stands tall at the height of 5 feet 9 inches. As a footballer, he has a fit, athletic body that weighs 75 kg. He has light brown hair and hazel eyes.