Have you seen Zayn’s new music video? It is titled ‘Let Me,’ which is gaining rank day by day. Sofia Jamora is seen as a model in that video. The one who is popularly known for her beauty and has millions of fans on Instagram has now debuted in music videos. No one can blame Zayn for being obsessed with a sexy model in a video after looking through her pictures. Now let’s know more about Sofia through this wiki!

Born on 6th May 1997, Sofia Jamora is native American who spent her childhood in Calabasas, California. She is 20 years old model, who is also famous on Instagram with more than 1.7 million followers. She rose to fame after uploading her bikini photo on her social account in 2015. Sofia, Taurus, is a model signed by Freedom Models and Next Models; and is a face of Lolli Valfre brand. The information regarding her parents and family are confined.

Sofia got her big break after uploading her bikini pictures on the internet. Mimi, a designer, spotted her and offered opportunities to be a model.

In an interview, she disclosed how she entered modeling world:

‘I was at a trunk show in Westlake at Kate and Lace, Mimi (co-founder of Frankies Bikinis) came up to me and asked me if I’ve ever modeled before and if I’d like to. From there I shot with Frankies and that opened up a whole bunch of opportunities for me!’

Jamora recently debuted in a music video, which rose her income to more. Being an Instagram star, and face of online fashion brand, we assume her revenue to be in several hundred thousand. As of 2018, her net worth exceeds $300 thousand.

One of the sexiest Instagram stars, Sofia is officially out of the reach of guys. She is currently in a love relationship with her boyfriend, Spencer Mow, who is also an Instagram sensation. We can see his pictures in her Insta account too.

She loves to add hot pictures frequently but not much about her personal life. Sofia is still boosting her career; so, has not thought about marrying anytime soon. 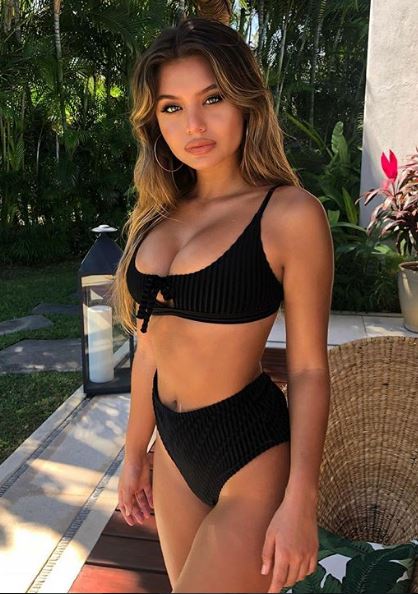 Her skin color is white; hair is brown, and eyes are green. She has not inked her body yet. Some sources mentioned her to be Gigi Hadid lookalike.