Netflix is on a fling, as it includes popular web series. Queer Eye reboot is one of those, which is trending right now. And from that, Fab Five are famous. Tan France is one member of the group who is best known as a fashion stylist. He played a proper role in a makeover of a heterosexual man. Now let’s know more about the fashion expert in this wiki!

Tan France’s hometown is in England. He was born on 20th April 1983. He was born to Pakistani family who migrated to the UK later. His zodiac sign is Taurus. His other facts are still a mystery, as he is mysterious himself. He holds British citizenship and belongs to mixed ethnicity. He came to fame as a fashion and makeover expert, and Queer Eye show boosted his recognition to the whole world.

Tan is not just a TV star but has been working as a Fashion expert before too. Keeping all these in an account, we can assume his income to be high. The actual figure of his per episode pay or salary is not revealed, yet is estimated to be $300 thousand a year.

The ‘Queer Eye’ star has gained a massive number of fans and also increased his value. As of 2018, Tan France’ net worth is estimated to be $1.5 million.

After coming in Netflix show, he has gained good fans and followers. And they do want to know if he is straight or not. After looking into a few episodes, anyone can say his sexuality. 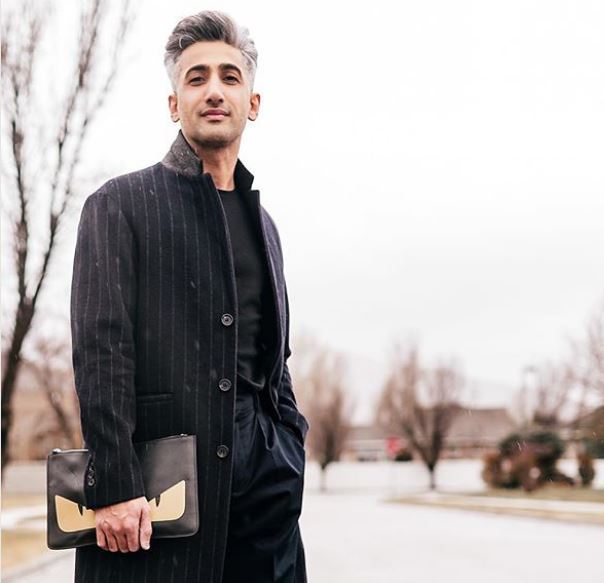 Tan is gay, and he does not want to hide it. He is enjoying his gay life. If you look at his Instagram account, you will not see a single picture of him with a girl. And he has already opened up about his gay relationship. Know about his homosexual partner in the next section.

When he first came to the show, he didn’t spell a word about his partner. But now he is open and loves to share his partner’s information to his fan followings.

The Fab Five member is married to an artist named Rob France in 2007. He is also a creative designer by profession. The duo exchanged vows in a small private wedding ceremony. Later’ they also gave a massive party in Salt Lake City.

Tan from the Queer Eye is one of a guy with good looks in the series. The TV show’s central theme is to turn a heterosexual male to a complete makeover man by the Fab Five group. And in the group, Tan is responsible for fashion.

France made up his mind and walked through a fashion journey. The main principle was to take it as a job, not just a role. And now, he has established himself not only on-screen but also on off-screen. He is associated with British brands like ‘State’ and ‘Kingdom.’

Tan is a handsome hunk with good physique with the height of 5 feet 8 inches. He is of mixed ethnicity, and his skin color is white. His hair was naturally black, but he has dyed half of it to white. His weight and body measurements are not disclosed yet.