Teresa Palmer is a popular Hollywood celebrity who is known for her roles in movies like Bedtime Stories, The Sorcerer’s Apprentice, and Take Me Home Tonight. Moreover, she captivated many fans with her roles in Warm Bodies, Lights Out, and Hacksaw Ridge. Nonetheless, the fans are excited for the actress as she announced her expecting another member of her family.

Teresa Mary Palmer was born in 1986 in Adelaide, South Australia. She celebrates her birthday on 26th February, which makes her age 35. She holds Australian nationality and comes from Caucasian ethnicity. The actress attended Mercedes College.

Teresa Palmer started her acting career appearing in movies like 2:37 in 2006. The movie also earned her a nomination for the 2006 Australian Film Institute Award for Best Lead Actress. She then signed with a talent agent in Sydney and appeared in movies like The Grudge 2, December Boys, and Restraint. 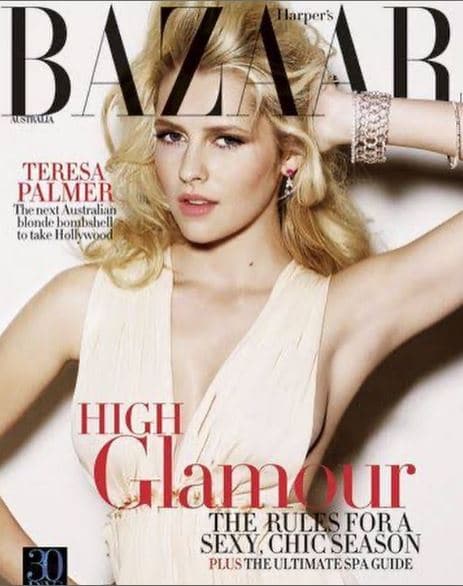 Likewise, she was picked by Adam Sandler as his love interest in Bedtime Stories and later won the romantic lead in Disney’s The Sorcerer’s Apprentice. Her later appearance includes movies like I Am Number Four, Wish You Were Here, Warm Bodies, Parts per Billion, and others. Her last few appearances include movies like The Choice, Lights Out, Berlin Syndrome, and Ride Like a Girl. As of 2021, Teresa Palmer holds an estimated net worth of $3 million.

Teresa has been married to her amazing husband, Mark Weeber. Her husband is a well-known actor, screenwriter, and director. Nonetheless, the couple started dating in late 2012 after contacting Twitter. Likewise, they were engaged in August 2013 and tied the knot in the same year on 21 December 2013 in Mexico.

Besides, the married pair also share three children together. They introduced their first child, Bodhi Rain, in 2014 followed by Forest Sage, in 2016, and daughter Poet Lake in 2019. Moreover, Teresa is also a stepmother to her husband’s son from his previous marriage. In February of 2021, the actress announced on social media that she is expecting her fourth child. The actress has not shared the due date.

Teresa was born to her father, Kevin Palmer, and mother, Paula Sanders. Her father is an investor while her mother is a former nurse and missionary.

Her parents separated when she was three. She has a step-mother, Kaaren Palmer, from her father’s second marriage. Moreover, she also has two half-sisters and two stepbrothers. Teresa was raised by her mother in public housing.

Teresa Palmer has a height of 5 feet and 5 inches. Likewise, she has a well-maintained and slim body which weighs around 58 kg. Teresa’s beauty is magnified by her gorgeous blonde hair and blue eye color.