Theresa Caputo is a psychic medium who is best known for her appearance in the TLC reality TV series, Long Island Medium. She has been showing her mystical abilities for over a decade on the show. Regardless, Theresa might have finally found her next partner after divorce from her long-time husband.

Theresa Caputo was born in 1966 in Hicksville, New York. She celebrates her birthday on 10 July, which makes her age 54. She holds American nationality and comes from White ethnicity.

Theresa has earned most of her fame and earning through her appearance on the hit TLC series, Long Island Medium. The show debuted in 2011 and has aired 14 seasons. The show follows the life of Theresa and her family. It documents Theresa’s career as a medium and her day-to-day routine. Theresa helps people communicate with their dead ones. She claims that she has seen spirits since age four. Each episode shows her private and group readings with both believers and skeptics. 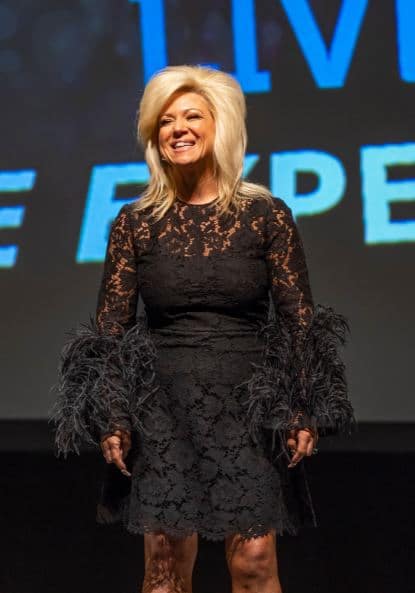 While many appreciate her gift, many are skeptical of her abilities and call her the master of cold readings. Besides, she has also toured the country with her live show, “Theresa Caputo Live the Experience”. She has authored books, You Can’t Make This Stuff Up: Life-Changing Lessons from Heaven, Good Grief: Heal Your Soul, Honor Your Loved Ones, and Learn to Live Again. As of 2021, Theresa Caputo holds a net worth of $3 million.

Anyone who has turned to one of Theresa’s shows will be familiar with Larry Caputo. He has been the husband of the reality star for 28 years. The pair tied the knot on 16 September 1989.

Likewise, they welcomed two children together, Larry Caputo Jr, in 1993, and a daughter, Victoria Caputo, in 1994. After being together for 28 years, Theresa and her husband called quits in 2017. Their divorce was finalized on 18 December 2018, ending their long relationship.

Since her divorce, Theresa has moved on with a mysterious boyfriend. Moreover, she also shared that her boyfriend has earned the approval of her kids. However, she did not share the identity of her boyfriend sharing,

“Like everything else in my life, I am always willing to share certain things when the time is right,”

Theresa was born to her father, Nicholas Brigandi, and mother Veronica Brigandi. Her father was a volunteer firefighter and worked for the Nassau County Department of Public Works before he was elected country water commissioner. Her family also includes her brother, Michael.

Theresa has a height of 5 feet and 4 inches. She has slim-built with attractive curves and weighs around 55 kg. Likewise, she also possesses Hazel eye color and Blonde hair color.