The youngest captain of the “Wicked Tuna,” Tyler McLaughlin, is one of the most celebrated and popular captains in the history of the show, all thanks to his impressive skills as well as his dashing good looks.

A full-time fisherman by profession, Tyler is not only a reality Star but is also an American Red Cross First Responder Award for rescuing two crew members.

Tyler McLaughlin is an American reality star who came into limelight through his role of captain of Pin Wheel Ship in the second season of the National Geography’s show “Wicked Tuna” in 2013.  His experience of fishing since his childhood helped him in the show. The show is based on fishing and various adventures associated with capturing bluefin tuna. 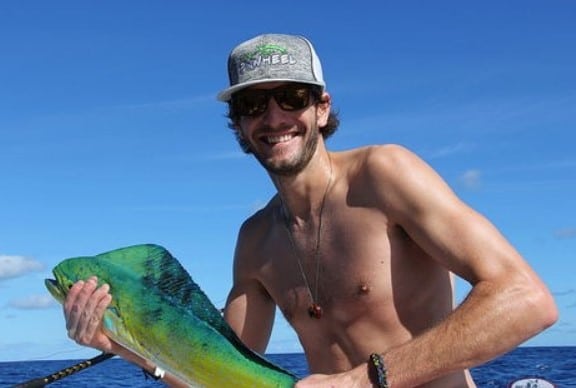 The average income of the ship captain is around $100 thousand. Though his exact income is under review, it can be speculated that he earns somewhere around the same. Also, he has been the winner two times and runner up three times, which could have escalated his income.

Besides the show, he is also a full-time fisherman and earns a handsome income from the trade.  He has few endorsement deals in his name. Tyler also owns a clothing line, “Pin Wheel Gate,” which is sold online. With income from all these, to date, he has accumulated a net worth of $400 thousand.

Tyler is currenly dating Savannah Tapley, a native of Cape Neddick, Maine, and is engaged to her. They have been posting about each other in their social media profile since December 2015. She is an executive at Tapley Insurance and is often seen hanging out with Tyler’s sister Marissa. Though there had been rumors of their marriage, both of them are pretty much single and romantically involved with each other. Before her, Tyler had once mentioned having been in a relationship once, the details of which are not known.

Tyler was born on December 21, 1988, to father Marty Laughlin in Rye Harbor, New Hampshire, USA. His mother’s name is unknown; however, he has often mentioned his father, who was his fishing mentor. Tyler used to go fishing with his father during his childhood in his father’s boat, Pacifier.  He had caught his first bluefin tuna at the age of 7. He has a sister named Marissa.

Regarding his education, he had attended Bridgton Academy High School as a child. Later, he enrolled at Nicholas college, and despite several attempts at dropping out, he eventually graduated in 2011. His parents had bought him a boat as promised when he managed to obtain a degree.

Tyler stands tall at 6 feet and 2 inches. The brown-haired blue-eyed star, despite his rough edges, cuts a dashing figure.