Zach Wilson is now changing his wardrobe to green as he is the newest quarterback to join the New York Jets of the NFL. Upon being selected second overall by the Jets in the 2021 NFL draft, Zach debuted during the first preseason against the New York Giants, completing 6 of 9 passes for 63 yards. Moreover, he also had an amazing football career while playing as Cougars for Brigham Young University.

Zachary Kapono Wilson was born in 1999 in Draper, Utah. He celebrates his birthday on August 3, which makes his age 22. He holds American nationality and comes from White ethnicity.

Zach played football during his time at Corner Canyon High School. As a senior, he had a record of 2,986 yards and 24 touchdowns while also rushing for 752 yards and eight touchdowns. Likewise, he played quarterback for Brigham Young University. As a freshman, he played in nine games and made seven starts. The Cougars were invited to the 2019 Hawaii Bowl during his sophomore season, where Zach was named BYU’s MVP. 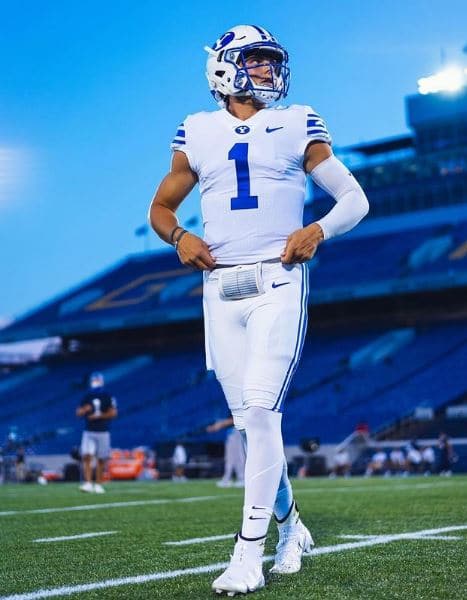 During the 2020 season, Zach started 12 games and completed 247 passed for 3,692 yards, 33 touchdowns, and three interceptions while rushing for 255 yards and 10 touchdowns. Moreover, he was also named the offensive MVP of the 2020 Boca Raton Bowl. Zack was selected second overall by the New York Jets in the 2021 NFL Draft. He signed a four-year deal worth $35.15 million which also featured a $22.9 million signing bonus and a fifth-year option. He made his professional debut on August 14, 2021, and played his first regular-season game on September 12, 2021. As of 2021, Zach Wilson is estimated to hold a net worth in the millions.

As Zach signs with the Jets, he has already accumulated a huge number of followers. Likewise, many fans of the NFL player are interested if he is dating anyone or has a girlfriend. Zach is in a relationship with his high school sweetheart Abby Gile.

His girlfriend is the daughter of University of Utah graduate Nicholle Gile and Dennis P Gile. Zach and his girlfriend met each other during their teenage years at Draper High School in Utah.

Zach also mentioned his girlfriend during an interview. He referred to her as “supportive” and added,

. “I have a girlfriend from Sandy (Utah), just down the road (from Draper) who goes to UVU (Utah Valley University). Her name is Abbey Gile. She’s great. She’s very supportive… I have known her since high school.”

Furthermore, the Jets quarterback also does not shy away from sharing pictures of his girlfriend on social media. He has featured her several times on several occasions, like her birthday, which falls in June. Regardless, we are sure we will hear the news of their engagement in the coming future.

Zach was born to his parents, Michael and Lisa Wilson.

Likewise, he comes from a large family which consists of his three brothers and two sisters.

Zach stands at the height of 6 feet and 2 inches. Likewise, he has an athletic body that weighs around 97 kg.