Bailey Sarian is a makeup artist and social media personality famous on YouTube for her “Murder, Mystery, and Makeup” series. She pairs her makeup tutorial videos with the storytelling of true crime stories. Besides, she has her own merch line of clothes and beauty products.

Originally from California, United States, Bailey Sarian was born on November 2, 1988, under the star sign Sagittarius. The 33-year-old make-up artist is American by nationality and belongs to the Anglo-North American ethnicity. She graduated from Paloma Valley High School in Menifee, California.

Bailey Sarian Net Worth and Salary

Sarian initially worked at Sephora for five years where she did professional makeup jobs for commercials, weddings, and music videos. She then worked briefly at Urban Decay.

Tired of working in the sales part of the beauty industry, Sarian decided to transition into a social media career. So, she stepped her feet on different social media platforms like Instagram, YouTube, and Facebook.

Sarian first began uploading her daily makeup looks on Instagram, which helped her gain a bit of a following. She then started a self-titled YouTube channel in January 2013 but uploaded videos occasionally. For a few years, she worked as a freelance makeup artist before becoming a full-time YouTuber. 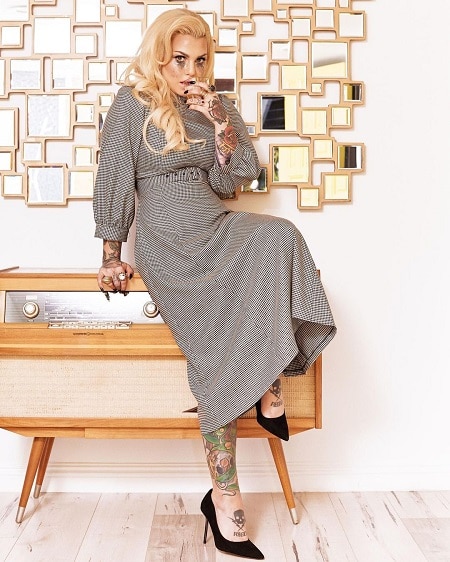 At first, Sarian wanted to share her makeup expertise and created only makeup-related content. In January 2019, she made the leap to include nonfiction storytelling. She started a series called ‘Murder, Mystery and Makeup’ where she combines makeup and true crime. Her channel has been growing ever since. She has now almost 4 million subscribers on her channel, which is a huge accomplishment.

The 31-year-old came out with her merch line in 2018 where she sells tee t-shirts and hoodies with catchy phrases like ‘Too Poor’ and ‘Suspish.’ She has also her makeup line called ‘Estate Cosmetics Bailey Sarian Eyeshadow Palette.’

Sarian has several sources of income. She earns most part of her income through YouTube, sponsored videos and posts, endorsement deals, advertisements, and her merch and makeup line. She is now a millionaire – thanks to her creative ideas and makeup talent. As of 2022, Sarian’s net worth is estimated at $7 million.

Sarian was engaged to her longtime boyfriend, Fernando Valdez before. Her ex-fiance was also a social media personality and helped Sarian in creating content and drawing designs for the merch line.

Some online sources claimed that Sarian and her fiance, Valdez, have already tied the knot. During an interview in October 2020, Sarian referred to Valdez as her ‘fiance,’ but before exchanging vows, they split.

Bailey’s fans had sensed something wrong when she started posting some weird posts on social media. There was one picture uploaded on Instagram, in which she captioned,

Sorry I’ve been mia, I’ll give you a life update soon & no I haven’t been okay but I appreciate you for asking.

She later re-edited the caption as: ‘Sorry I’ve been mia, ❤️ brb’.

Following this, Bailey confirmed that she and her ex-fiance Fern had split on January 24, 2022.

Sarian is quite secretive when it comes to revealing her parents’ identity. She hasn’t talked anything about her family background and parents. All that is known is that she has two siblings; an older sister and a younger sister. One of her sisters is named Madison Malmberg.

When Sarian was a little kid, her mother used to work as a 911 dispatcher.

Sarian has a decent height of 5 feet 4 inches and weighs around 59 kg. Her dark brown hair and hazel eyes provide a perfect complement to her stunning personality.

Watch a video of Bailey where she talks about Fake News!

Who is Bailey Sarian?

Bailey Sarian is a popular YouTube star, a makeup artist, and a model.

Where is Bailey Sarian from?

How old is Bailey Sarian?

How much is Bailey Sarian worth?

No, Bailey Sarian belongs to the Anglo-North American ethnicity.

Bailey Sarian was previously engaged to Fernando Valdez but is not together. So, Bailey is not married and is single.

How tall is Bailey Sarian?

Bailey Sarian stands tall, at a height of 5 feet 4 inches.