Rebecca “Becky” Mantin was born in 1980 in Norwich, Norfolk, England. She celebrates her birthday on 18th October, which makes her age 40. She holds British nationality and comes from White ethnicity. The presenter graduated from Norwich High School for Girls.

Becky started her career as a writer for the Eastern Daily Press. At the same time, she also appeared on the commercial radio station Broadland 102. Later, she worked for ITV Angila as a fashion presenter before taking meteorological training. After her training, she became the ITV News Anglia lead weather presenter and also worked for Late Night Checkout and Animal Tales. 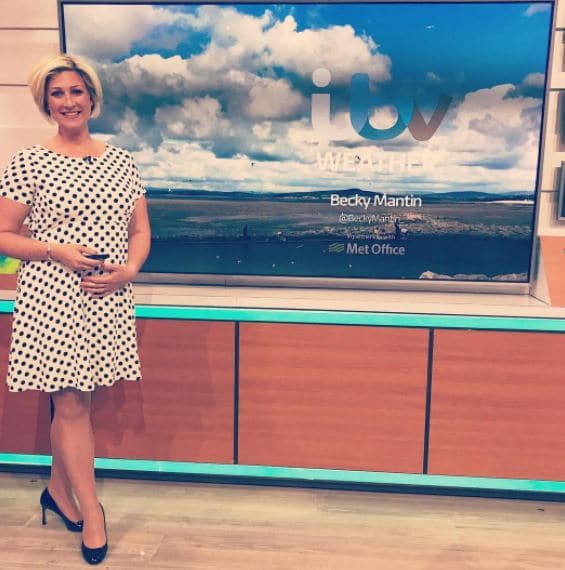 Moreover, she started appearing on national channels such as ITV Weather, Channel 5, and Sky and joined ITV Weather permanently on February 2005. She also co-presented ITV’s This Morning Summer and has made several appearances as a weather presenter on Good Morning Britain. In 2019, she had also presented Inside Britain’s Storms on ITV. As of 2021, Becky Mantin is estimated to have a net worth of thousands.

Becky’s viewers are often stunned by her charming personality. Many of her viewers are curious to know more about the weather presenter’s personal life. She is actually married to a yachtsman turned professional rugby coach Jack Heald in Walberswick. The pair tied the knot on 12th December 2009 and has been together ever since. Moreover, Becky is also often showing off her husband on social media and has featured him on occasions such as birthday, valentine’s day, and anniversary.

Besides, the married couple also shares a huge family with four adorable children. They first introduced a boy, Rory, in October 2010 followed by Thomas in 2012 and Elizabeth in 2015. They had their youngest child, Charlotte, in October 2019. Nonetheless, Becky is often making time for her family despite her busy schedule and features her family of six on social media.

Becky Mantin was born to her parents, Wendy and Richard Mantin. Her parents raised her in the south Norfolk village of Saxlingham Nethergate.

The beautiful presenter, Becky stands tall at a height of 5 feet and 10 inches. She has a well-maintained physique and a healthy weight. Moreover, she possesses blonde hair and light brown eyes.