The young and culinary star Ben Watkins who had appeared in the 6th season of the renowned show named MasterChef Junior took his last breath recently after his long battle against cancer.

Ben was born in September of 2006 on the United States of America and died on 18 November 2020 after his long battle against cancer. He was 14 years of age before he passed away. As his birth date is still unknown to the media, information regarding his birth sign is still unknown to the media. He was African-American by nationality and held the ethnicity of mixed. Likewise, information regarding his academic qualification is yet to be known.

One of the fan-favourite contestants of the show Master Chef Ben Watkins recently passed away on 18 November 2020 after a long battle against cancer. He was just 14 years old when his tragic passing happened. He was already having a rough time three years ago as his mother and father passed away ina murder-suicide. And battling against cancer was another rough time which made the incredibly talented home cook passed away.

With his tragic death, his family, friend, and some famous face showed heartfelt condolence towards him via social media profiles. 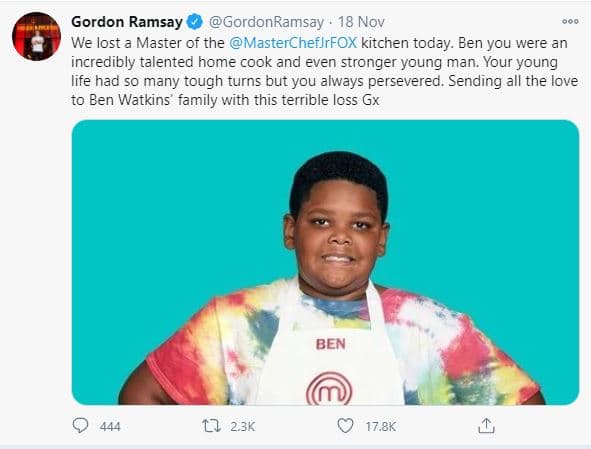 Caption: Ben Watkins died on 18 November 2020 after his long battle against cancer.

Gordon Ramsay, one of the renowned chefs, poured some words for him via his Twitter.

“We lost a Master of the @MasterChefJrFox kitchen today. Ben, you were an incredibly talented home cook and an even stronger young man. Your young life had so many tough turns but you always persevered. Sending all the love to Ben Watkins’ family with this terrible loss Gx.”

His uncle Anthony Edwards and grandmother Donna Edwards said in a statement that,

“Our Ben went home to be with his mother this afternoon afte a year-and-a-half-long battle with cancer.”

“Ben suffered more than his share in his 14 years on this Earth, but we take solace in that his suffering is finally over and in that, in the end, Ben knew he was loved by so many.”

Ben is now survived by his family, friends, and his mentors.

Ben came into the limelight just at the age of 11 as he was featured on the Fox renowned show named MasterChef Junior. There his eye for a dessert meld with his most tragic back story which made him be the fan’s and viewers’ favourite. His skills towards cooking rise up from after she started to work at his father Michael’s barbecue restaurant.

And for his baking skills, he credited his mother where he commented,

“My mom taught me everything she knew. Or I Just picked it up by watching her.”

Then his first appearance saw him compete against other 40 contestants who were aged between nine and 13 to have a chance to win the grand prize of $100,000. However, he was placed in the top 18 on the show.

Likewise, Ben might have earned a decent amount from his culinary skills. However, information regarding his net worth is yet to be known.

Ben was too young to be involved in affairs and dating others. He was busy focusing on his professional career.

Ben was born to African-American parents. He was born to Leila Edwards and Mike Watkins. However, he lost both parents his a murder-suicide. Likewise, he was the only child of his parents.

Ben was blessed with decent body measurement where he used to stand tall at the height of 4 feet 5 inches and weighs about 53 kilograms. He had black coloured hair with pairs of beautiful black coloured eyes.