Candace Parker is one of the biggest names when it comes to WNBA. She started her WNBA career playing for the Los Angeles Sparks and now plays for the Chicago Sky. Likewise, she mainly played forward position and was already making headlines at a young age winning the 2003-04 Gatorade National Girls Basketball Player of the Year award. Besides, she is also the second player to dunk in a WNBA game.

Candace Nicole Parker was born in 1986 in St. Louis, Missouri. She celebrates her birthday on April 19, which makes her age 34. She attended Naperville Central and graduated from the University of Tennessee. She holds American nationality and comes from African-American ethnicity.

Candace started her WNBA career after being selected as the first pick in the 2008 WNBA Draft by the Los Angeles Sparks. Likewise, she scored 34 points, 12 rebounds, and 8 assists against Phoenix Mercury in her first game. The same year, she earned Hanns-G ‘Go Beyond’ rookie of the month and MVP for the 2008 season. Moreover, Candace entered the 2008 Summer Olympics and won the gold medal. 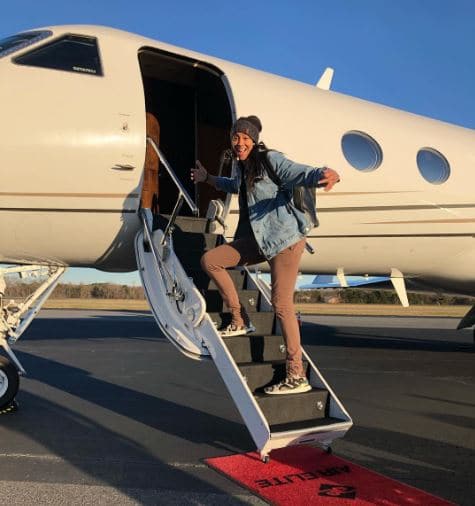 In 2012, she again represented the U.S in the 2012 Olympics in London. In 2016, she helped Sparks win their first final WNBA Finals title since 2002. Likewise, she also won the WNBA Finals MVP Awards. In 2019, Candace took a new role as an analyst for NBA Games on TNT and NBA TV. As of 2021, Candace parker holds a net worth of $5 million.

Candace was previously married to Shelden Williams, a former basketball player who played college basketball at Duke University. The couple had tied the knot on November 13, 2008. Likewise, the duo also introduced a baby-girl named Lailaa Nicole Williams on May 13, 2009. After 8 years of marriage, the pair announced that they were splitting up in November 2016.

The duo filed for divorce citing “irreconcilable differences” and lived separately for three months before their divorce. Likewise, they shared joint custody of their daughter with no child support payments. For now, the NBA star is not linked to anyone and lives happily as a single mother.

Candace was born to her parents, Sara and Larry Parker. Likewise, her family also includes her two older brothers, Anthony Parker and Marcus Parker. Anthony is also a basketball player and a former NBA star. On the other hand, Marcus is a doctor.

As a basketball player, Candace surely possesses peak physical features. She stands tall at the height of 6 feet and 3 inches.

Likewise, she rocks a slim and fit body that weighs around 82 kg. Candace possesses black hair and dark brown eyes.