Gehana Vasisth is an Indian actor, model, and television personality best known to Indian audiences for her role in the web series Gandi Baat. In February 2021, she was arrested in connection with making and featuring in adult films, and she is currently out on bail. She has shown support to Shilpa Shetty’s husband Raj Kundra who was arrested by Mumbai police on 19 July for alleged involvement in the production of adult content.

Originally from Chirimiri, Chhattisgarh, Vandana Tiwari a.k.a. Gehana Vasisth was born on 16 June 1993 under the star sign Gemini. She is an Indian by nationality and belongs to the South Asian ethnicity. She graduated with an engineering degree from All Saints College of Technology, Bhopal.

Vasisth is an actress, model, and television personality. As a model, she has worked for several national and international brands and has done more than 80 advertisements. She was even crowned as Miss Asia Bikini.

Vasisth entered the film industry through a lead role in a film called Filmy Duniya. Later, she played a handful of lead roles in Telugu movies such as Anakunnadi Okkathi Ayyindi Okkathi, Namasthe, Aidu 5, and Btech Love Story. She has also performed on several item songs both in Bollywood and Telugu cinemas.

The model-turned-actor also served as an anchor in Sahara One Television Channel. She even did a role in the serial Behenein on Star Plus and appeared as VJ on True Life show on MTV India. Also, she has worked in many web series including Gandi Baat season 3 on Alt Balaji.

Vasisth earns a decent sum of money from working as a model and actor in films and TV series. She has accrued substantial wealth and lives a luxurious lifestyle. As of 2021, she has an estimated net worth of INR 2 crore.

The 28-year-old actor is still unmarried. It seems she doesn’t have a boyfriend as well. To date, she hasn’t announced being in a relationship with anyone.

She hasn’t even made a single post on her social media sites, which suggests that she has a boyfriend. But some of her Instagram posts hints to us that she is in desire of passionate love.

The Gandi Baat actor was born into a religious Brahmin family. Her mother, Meena Tiwari, is a housewife, and her father, Rajendra Tiwari, was an education officer. She is the eldest child of her parents, She has two younger brothers Vedant and Sankalp and a younger sister Namrata.

Vasisth has a decent height of 5 feet 6 inches. She has a well-maintained, slim body that weighs around 57kg. 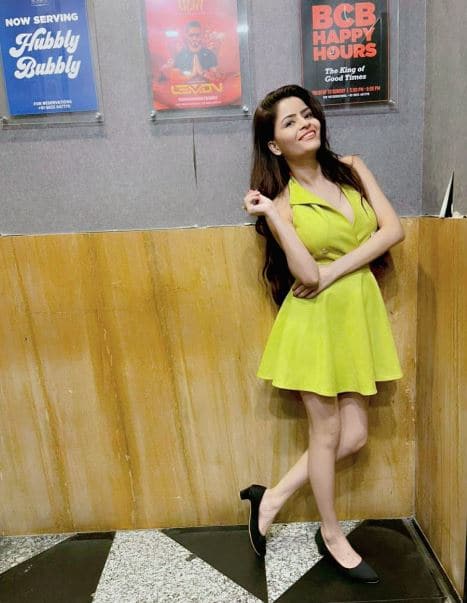 She has black hair and dark brown eyes. Her body measurements are 34-26-34 inches.