Hallie Jackson is a renowned American journalist who currently serves as the NBC News’ chief White House correspondent. Besides, she is a fill-in anchor for ‘Today’ and hosts the 10 a.m. hour of MSNBC Live. She was one of the team members that was awarded the 2019 Hillman Prize for Broadcast Journalism.

Originally from Yardley, Pennsylvania, Hallie Jackson was born on April 29, 1984, under the star sign Taurus. The 38-year-old TV journalist is American by nationality and part of Scottish-English ethnicity. She graduated from Pennsbury High School in 2002. Later, she graduated Phi Beta Kappa from Johns Hopkins University in 2006 with a B.A. degree in political science.

Hallie Jackson Net Worth and Salary

Jackson started her professional journalism career working as a general assignment reporter for WBOC-TV in Salisbury, Maryland. In 2008, she joined WFSB-TV in Hartford, Connecticut, and spent four years serving as a weekend anchor and reporter. Later, she worked as a national correspondent for Hearst Television for two years in Washington, D.C.

In 2014, Jackson was appointed as a reporter and journalist at NBC News. For a year, she reported from NBC News’ Los Angeles bureau. She covered the 2016 Republican primary battle and also the rise of President-elect Donald Trump. The same year, she started anchoring the 1 P.M. ET edition of MSNBC Live.

Jackson receives a considerable salary from NBC from serving as a chief White House correspondent and host and anchor of its affiliates. With over 15 years of journalism experience, she has accumulated a massive fortune worth millions of dollars. As of 2022, Hallie Jackson has an estimated net worth of $1.5 million with a $201,000 annual income.

Jackson was previously married to her college sweetheart, Doug Hitchner. The ex-pair was engaged in 2010 and exchanged wedding vows a year later at Perkasie, Pennsylvania, Bucks County. However, their marital relationship ended with divorce.

Jackson decided to move on from the divorce and began dating NBC News reporter and producer, Frank Thorp. In November of 2019, she revealed that she was pregnant with her boyfriend’s baby and expecting their first child in April 2020.

Jackson gave birth to her first child, daughter Monroe Jackson Thorp in March 2020. She is currently enjoying her life with her partner and their daughter.

The TV journalist was born to parents Heidi and David Jackson. She is apparently the only child of her parents. 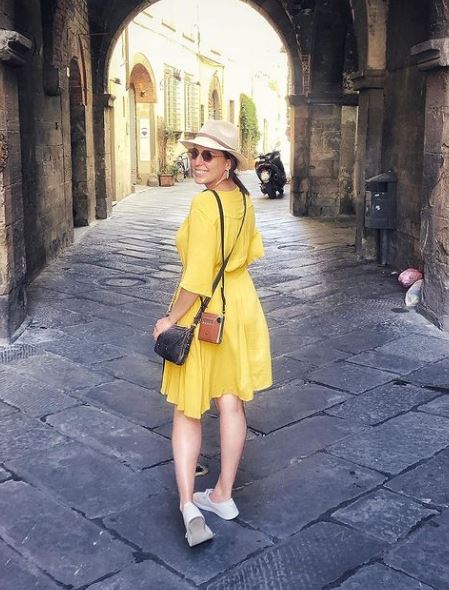 Jackson has a decent height of 5 feet 6 inches. She has a well-maintained, perfect body that weighs around 58 kg. Her chestnut brown hair and hazel eyes add more to her glamorous look.

How old is Hallie Jackson?

Where was Hallie Jackson born?

How much does Hallie Jackson make?

What is Hallie Jackson’s net worth?

Who is Hallie Jackson’s husband?

Who is Hallie Jackson’s partner?

What is Hallie Jackson’s daughter’s name?

How tall is Hallie Jackson?