Helena Christensen is a supermodel who is popular as a former Victoria’s Secret Angel. However, she has ventured into the fashion industry and has started her own clothing life and magazine. Besides, she is also a supporter of funding for breast cancer organizations and other charities. Helena’s fans recently went crazy after the supermodel stepped into the dating game after a while. Although she has not publicly announced dating, the model has been spotted with a mysterious man.

Helena Christensen was born in Copenhagen, Denmark, in 1968. She celebrates her birthday on 25th December, which makes her age 52. She holds Danish nationality and comes from mixed ethnicity of Danish and Peruvian.

Helena came into fame in the 90s, appearing in the magazines like Vogue, Elle, Harper’s Bazaar, and W. Likewise, she was in Victoria’s Secret catalog and their TV commercials as one of the original “Angels.” Moreover, she is also the co-founder and creative director of Nylon magazine in 1999. Helena also launched her own clothing line, Christensen & Sigersen, and in 2012, she created a lingerie collection, Helena Christensen for Triumph. 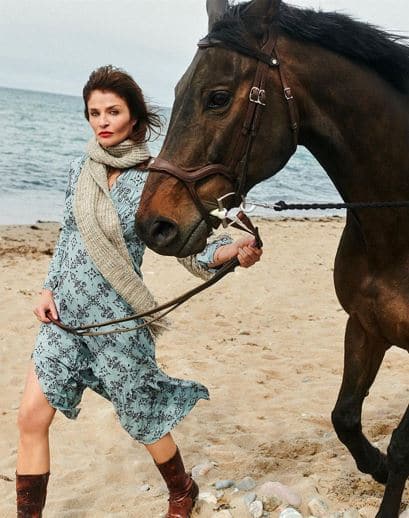 Besides, Helena is also an accomplished photographer, and her work has appeared in Nylon, Marie Claire, and ELLE. Moreover, she also worked on a photography series: Liberty Ross, Liv Tyler, and The Pursuit of Grace. As of 2021, Helena Christensen holds a net worth of $20 million.

Being a supermodel means that your dating life is often a subject of concern for the fans, and Helena Christensen is no exception. Her first well-known relationship was with INXS frontman Michael Hutchence. The pair had on and off relationship for five years in the early 1990s. Likewise, she then was in a relationship with the actor, Norman Reedus. The duo also dated for five years and also introduced a son, Mingus Lucien Reedus, on 13th October 1999.

Unfortunately, Helena and Norman separated in 2003. Later, the model dated Interpol singer Paul Banks for seven years before separating in 2018. Now, the model is making headlines for dating a mysterious man. Helena was spotted with a man just a few days before her 52nd birthday on December 11, 2020, in New York City. The camera caught the duo getting cozy and sharing a hug. On February 14, 2020, the pair were spotted again at an outdoor brunch in New York City. Regardless, Helena is yet to share the details on her mysterious boyfriend.

Helena was born to her Danish father, Fleming, and a Peruvian mother, Elsa. She is the oldest sister in her family, the young one being Anita.

Helena stands at the height of 5 feet and 9 inches. Her stunning body measures 35-24-35 and weighs around 64 kg. The beautiful model possesses brown hair and green eyes.