A three-time grand slam doubles champion, Jack Sock, is an American professional tennis player who has a career-high doubles ranking of No. 2 and world No. 8 in singles. Currently ranked at No. 103 in the world, Sock is set to make his eighth appearance at the Indian Wells Masters as he has been awarded a wild card entry.

Originally from Lincoln, Nebraska, Jack Sock was born on September 24, 1992, under the star sign Libra. The 30-year-old tennis player is American by nationality and belongs to the Caucasian ethnicity. After graduating from Blue Valley North High School, he enrolled at the University of Nebraska.

Jack Sock Net Worth and Salary

As a junior, Sock made his ITF debut in October 2008 at the Pan American Championships. At the 2010 U.S. Open, he defeated Denis Kudla in the final, becoming the first American winner of the junior championships. He also won the Boy’s Junior National Tennis Championship in 2010 and 2011.

Sock earns primarily from his tennis career. He has reportedly made $11,431,795 as prize money (singles & doubles combined) from ATP Tour alone. He has also supplemented his massive fortune with brand endorsement and advertisements. As of 2022, Jack Sock has an estimated net worth of $10 million.

Sock is happily married to his wife, Laura Little. His wife is a beauty pageant who won the title of Miss North Carolina 2019. The couple tied the knot on 12 December 2020 at Kiawah Island, South Carolina.

Before saying “I Do” with Laura, Sock dated tennis player Sloane Stephens. He was also previously linked to tennis player Katie Boulter.

The professional tennis player was born to parents – Pam and Larry Sock. His father works as a financial advisor in Lincoln. When Sock was 12, he moved to Kansas with his mother and older brother Eric to train at the Mike Wolf Tennis Academy. 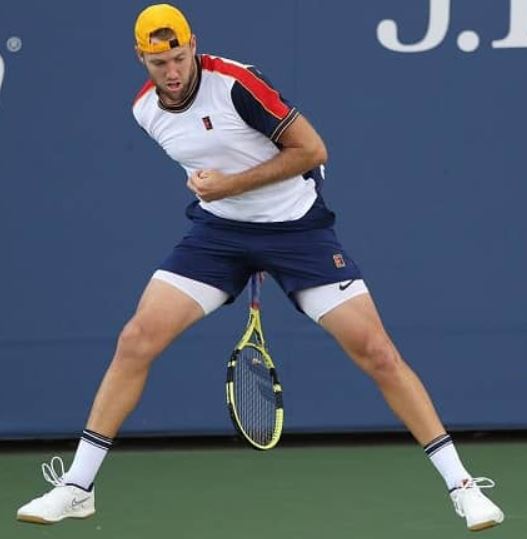 Sock stands tall at the height of 6 feet 3 inches. As an athlete, he has a well-maintained, fit body that weighs 88 kgs.

How old is Jack Sock?

Where is Jack Sock from?

How much does Jack Sock make?

What is Jack Sock's net worth?

Is Jack Sock dating someone?

Jack is already married, so, is not dating anyone.

Who is Jack Sock's wife?

Jack is married to his wife, Laura Little. The wedding was held on December 12, 2020, in Kiawah, Island South Carolina.

How many kids does Jack Sock have?

Jack Sock does not have children.

How tall is Jack Sock?