Jaden Hossler, known as Jxdn, started out with TikTok but now is a popular singer and songwriter. He earned popularity making videos on TikTok since 2019 and started his career in 2020 with the release of his debut single, “Comatose.” Regardless, Jaden has been involved in various controversies in the past few months.

Jaden Isaiah Hossler was born in 2001 in Dallas, Texas. He celebrates his birthday on February 8, which makes his age 20. He holds American nationality and comes from White ethnicity.

Jaden started his career on TikTok in 2019. He quickly earned millions of followers in a few months and was invited to join Talent X Talent X and the Sway House. However, he left the house in Mau 2020. Despite leaving the group, his follower count still increased, and he has over 9.3 million followers on his TikTok. However, Jaden pursued his new music career in February 2020 with his debut single, “Comatose.” The single caught the attention of Travis Barker, who signed him to his label DTA Records in a joint deal with Elektra Records.

Jaden’s debut single was followed by Angeles & Demons and So What in 2020. He also released the song Pray in August of the same year, and in October, he signed into a global co-publishing deal with Warner Chappel Music. Nonetheless, he released his debut studio album, Tell Me About Tomorrow, on July 2, 2021. As of 2021, Jaden Hossler is estimated to hold a net worth of near $1 million.

Jaden’s dating life is surely a controversy in the dating world. The star previously dated Mads Lewis in 2019, and the pair were in a serious relationship. However, Jaden and Nessa Barrett, his current girlfriend, started collaborating on a music video for La Di Die. During the time, Nessa was dating Josh Richards, who was a member of SwayBoys. As Jaden and Nessa were spending more time together, Mads accused Jaden of having an affair with Nessa. Many TikTok users and Josh Richards believed the accusations to be overblown.

However, after Jaden and Mads broke up, drama emerged, and Jaden was quickly accused of dating Nessa. Apart from all the drama, Jaden and Nessa are currently dating and are also Instagram officials. They have featured each other many times on social media. Moreover, in September, Jaden uploaded a picture kissing his girlfriend on the red carpet.

Jaden was born to his parents, John Wilson Hossler Jr. and Amy Hossler. His mother has many followers on Instagram. Likewise, his family includes his two sisters named Sophie and Haley. 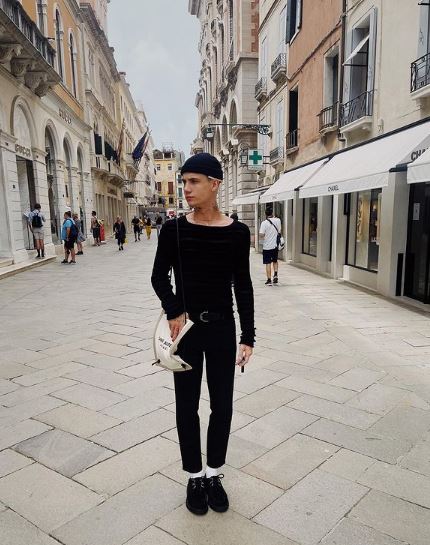 Jaden stands at the height of 5 feet and 10 inches. The TikTok star has a slim built body. Likewise, he has inked various parts of his body.