Karl Pilkington is a renowned TV and radio personality, author, travel show presenter, comedian, and actor. He gained recognition as the presenter of Sky 1 travel shows An Idiot Abroad and The Moaning of Life. Besides, he is co-founder of a television production company called ‘RISK Productions,’ along with Gervais and Merchant.

Originally from Manchester, England, Karl Pilkington was born on 23 September 1972 under the star sign Libra. The 48-year-old TV presenter is British by nationality and belongs to Caucasian ethnicity. He attended Cecil Avenue Comprehensive School and later studied at Ashton-on-Mersey School.

Initially, Karl worked as a producer and later as the head of the production on Xfm. After several years, he started to work on The Ricky Gervais Show as a producer. Eventually, he became the main presenter and created many features for the broadcasts, including  Rockbusters, Educating Ricky, 15 Taiwan, and many others.

Karl received global recognition after he starred on Sky 1 travel documentary series An Idiot Abroad in September 2010. He continued to present the second and third spin-off series of An Idiot Abroad. He also starred in the Sky 1 documentary called The Moaning of Life from 2013 to 2015. Later, he co-wrote and starred in a Sky 1 scripted sitcom Sick of It. 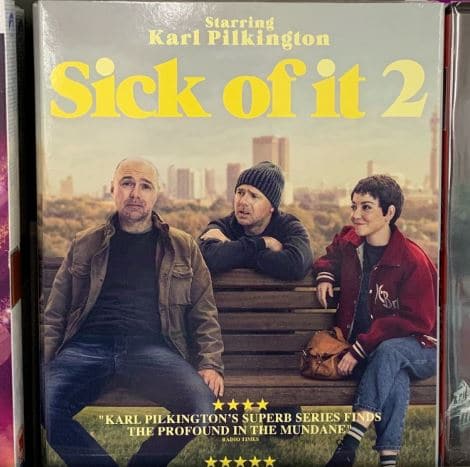 The TV presenter also ventured into acting and made his acting debut with the Channel 4 comedy-drama Derek. He also did voiceover work for clients such as FreeView, HMV, Vodafone, Sony PSP, and Unilever. Besides, he is a Sunday Times best-selling author and has written seven books to date.

Karl has accumulated millions of net worth from his work as a TV presenter, author, radio producer, and actor. He reportedly receives an annual salary of $600 Thousand. As of 2021, he enjoys a hefty net worth of $3 million.

Though Karl will be in his ’50s after a couple of years, he is still an unmarried man with no parenthood experience. However, he does know how to maintain a healthy relationship for decades.

The duo has been in a relationship since 1994 and has already celebrated their 25th anniversary. Although both of them are public figures, they opted for a low-key relationship.

Karl was born to parents Dorothy and Alan Pilkington. He is one of the three children of his parents. He grew up with his older brother, Mark Pilkington, and a sister on the Racecourse Estate in Sale, Greater Manchester. His parents used to work blue-collar jobs to support him, his brother and sister.

Karl stands at a decent height of 6 feet 1 inch. With growing age, he has gained some weight and weighs around 80 kg. He has dark brown hair and grey eyes.