O.T. Fagbenle is a British-Nigerian actor best known for his role as Luke Bankole in the Emmy Award-winning Hulu’s show The Handmaid’s Tale. Having appeared in several films, stage, and television production, the actor made history when he wrote, direct, composed, executive produce, and star in the opening episode of the TV series ‘Maxxx.’

Originally from London, England, O.T. Fagbenle was born on 22 January 1980 under the star sign Aquarius. His birth name is Olatunde Olateju Olaolorun Fagbenle. The 40 years old TV actor is British by nationality and belongs to Yoruba-English ethnicity. In his final year of high school, he won the sportsman of the year award. He later trained at the Royal Academy of Dramatic Arts in London.

As a child, Fagbenle had a passion for music and played the saxophone in bands across Europe. He performed at the Edinburgh festival, the Royal Albert Hall, Wembley Arena, and even toured to Spain. At the age of 16, he landed a lead role in a Nigerian adaptation of Macbeth, which inspired him to pursue a career in acting.

Fagbenle has appeared in dozens of plays across the UK, including Ragamuffin, Romeo & Juliet, and Six Degrees of Separation. In 2002, he made his Tv debut with a minor role in EastEnders, followed by another short role in Casualty. He played a recurring role of Tyler in the 2004 series As If. He then made his feature film debut, appearing in Breaking and Entering in 2006.

Since then, Fagbenle has landed several lead roles in TV series such as Grownups, FM, Material Girl, Thorne, Quick Cuts, The Interceptor, The Handmaid’s Tale, and Maxx. Besides, he has appeared in films like I Could Never Be Your Woman, Radio Cape Cod, Non-Stop, and Omar.

Fagbenle has also played multiple leading roles for BBC Radio 4 and BBC world service. He’ll next be seen as President Barack Obama in the upcoming TV series The First Lady and as Rick Mason in the film Black Widow. His successful acting career has made him a millionaire over the years. As of December 2020, he has an estimated net worth of $4 million.

Fagbenle has played as an on-screen husband in The Handmaid’s Tale. However, his real-life dating status remains a mystery. He hasn’t been open about his love life and never been entangled in dating rumors. So, until the actor himself clears the fog about his relationship status, nothing can be confirmed for now.

Fagbenle comes from a bi-racial family. He was born to Yoruba Nigerian father, Tunde Fagbenle, and a British mother, Ally Bedford. His mother raised him in Nigeria, Spain, and Germany.

The Handmaid’s Tale actor grew up with his three siblings. He has two younger brothers – Luti Fagbenle, an actor and film producer, and Daps, a video director and producer. His sister, Temi Fagbenle, is WNBA player and olympian. 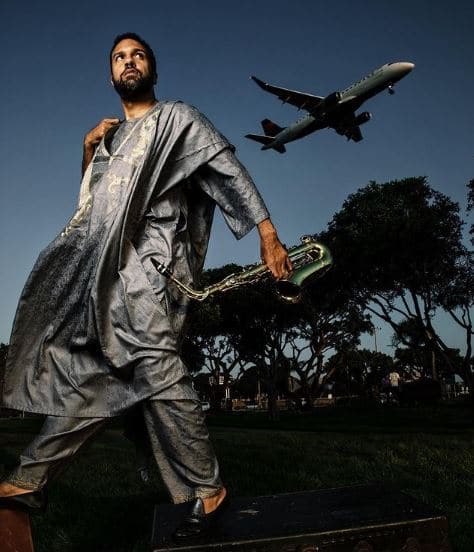 Fagbenle has a decent height of 6 feet. He has a medium build, fit body that weighs around 78 kg. Similarly, he has black curly hair and dark brown eyes.