Portia Woodman is a rugby union player and a member of the New Zealand Women’s Sevens team. She is the most recognizable player in women’s seven, as the leading try scorer in World Series. Likewise, Portia had been making headlines as New Zealand won the gold medal match at the women’s rugby tournament against France in 2021.

Portia Woodman was born in 1991 in Auckland, New Zealand. She celebrates her birthday on July 12, which makes her age 31. She holds New Zealander nationality and comes from Ngāpuhi ethnicity.

Portia Woodman Net Worth and Salary

Portia made her debut playing for the Black Ferns in 2013 against England. Later, the same year, she was included in the squad that won the 2013 Rugby World Cup Sevens in Russia. In 2015, Portia was named the World Rugby Women’s Sevens Player of the Year. Likewise, she was also named in the 2017 Women’s Rugby World Cup squad. 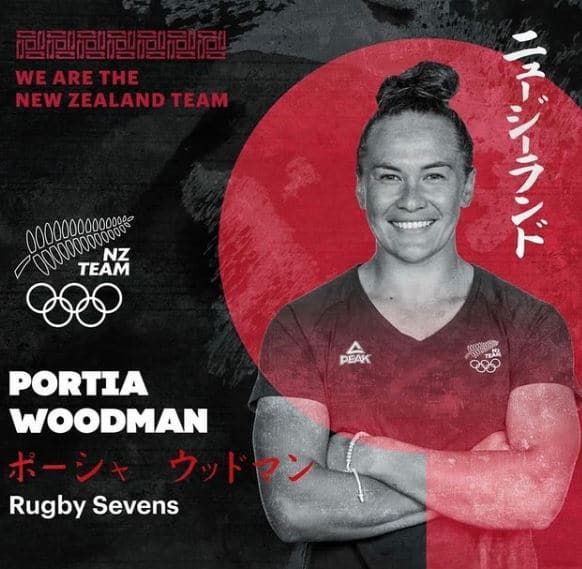 Moreover, The Black Ferns also won the World Cup. She is also the gold medal winner at the 2018 Commonwealth Games. Besides, she is also part of the team representing New Zealand in the Olympic Games Tokyo 2020. The team won the gold medal match against France with a score of 26-12. As of 2022, Portia Woodman holds an estimated net worth of $1.5 million.

Portia is openly lesbian. She is in a relationship with her partner, Renee Wickliffe. Her partner is also a rugby player playing for The Black Ferns. Nonetheless, the couple has been together for a long time and has featured each other several times on social media. Portia often features her partner on the occasions of Valentine’s Day, Mother’s Day, and Birthday. In an interview Portia shared,

Besides, the pair also share a daughter named Kia Wickliffe, who has appeared on countless Instagram posts of both her parent.

Portia was born to her parents, Kawhena Woodman and Kathryn Woodman. Her father and her uncle, Fred Woodman, are former All Blacks. Moreover, her aunt, Te Aroha Keenan, is a former Silver Fern. Her siblings include Dalton and Baden.

Portia has a height of 5 feet 7 inches. Likewise, she possesses a muscular, athletic body that weighs around 70 kg.

How old is Portia Woodman?

Where is Portia Woodman from?

What nationality is Portia Woodman?

Portia Woodman is a New Zealander by nationality.

Who is Portia Woodman's partner?

Portia Woodman is in a relationship with Renee Wickliffe.

What is the net worth of Portia Woodman?

Portia Woodman is worth $1.5 million.

How tall is Portia Woodman?