Tony Stewart is a semi-retired stock car racing driver and a NASCAR team owner. He is a three-time NASCAR Cup Series Champion and has won other racing titles, including Indy, midget, sprint, and USAC Silver Crown. He was inducted into the NASCAR Hall of Fame in 2019.  Nonetheless, Tony is making headlines as he announced he is engaged to a new fiancé three years after his last engagement did not work out.

Anthony Wayne Stewart was born in 1971 in Columbus, Indiana. He celebrates his birthday on May 20, which makes his age 49. Likewise, he holds American nationality and comes from White ethnicity.

Tony grew up riding go-karts and started racing competitively at a very young age. Likewise, he also won his first championship at the World Karting Association in 1987. Moreover, in 1995, he was crowned the champion of all three USAC events and made his NASCAR debut a year later in the Busch series. He won the first Indy Racing League race at Pikes Peak. He is a three-time NASCAR Cup Series champion winning titles in 2002, 2005, and 2011. 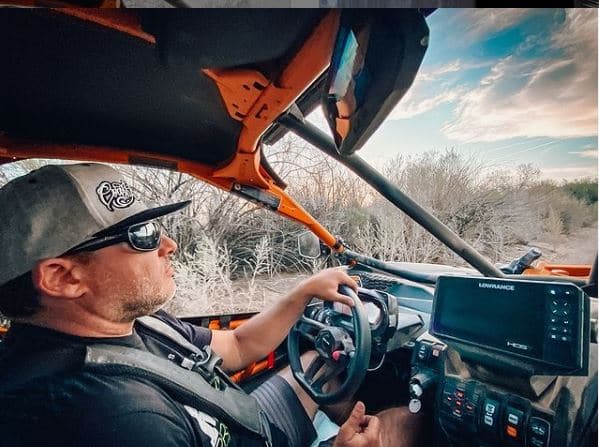 Besides, he is the only driver in history to win a championship in both IndyCar and NASCAR. He is also a partner in Haas CNC Racing and owns several USAC Car owner titles. Moreover, he has also played commercials for Subway and Coca-Cola. As of 2021, Tony Stewart holds a net worth of $90 million.

Tony brought a surprise to his fans when the news of his engagement came across many. The race driver is engaged to Leah Pruett. NHRA icon Don Prudhomme first introduced the couple, but they only started dating in March of 2020. Leah invited Tony to stay in Lake Havasu for four days with friends during the pandemic but ended up staying for four months.

Regardless, Tony announced his engagement on March 19, 2021, writing,

“So excited to spend the rest of my life with a truly amazing woman. She’s motivated, hard working, funny as hell, and as dedicated to her sport as anyone I’ve ever known. Love you babe.”

Regardless, the pair have not shared anything on their wedding date as of now. Regardless, Tony was previously engaged to his former girlfriend, Pennelope Jimenez, in 2017. However, they called off their wedding with Tony sharing that he and his ex-fiancé “decided we both needed to go different directions.”

Tony was born to his parents, Nelson Stewart and Pam Boas. His father served as a car owner and crew chief when Tony was go-karting at age seven. Likewise, his family also includes his sister Natalie Stewart.

Tony Stewart has a height of 5 feet and 9 inches and weighs around 82 kg. The race driver possesses dark brown hair and eye color.