Whoopi Goldberg is regarded as one of the prominent figures in the Entertainment Industry to have won several accolades. She is the second black woman to receive an Academy for acting and one of the few actors to have won Academy Awards, Grammy Awards as well as an Emmy Award. As of 2019, she appears in the TV Show, The View as a co-host and makes headlines for her controversial comments.

Goldberg was born on 13th November 1955 in New York, USA. She holds American nationality, and her ethnicity is African-American. Her real name is Caryn Elaine Johnson but became popular with her stage name, Whoopi Goldberg referring to a Whoopee Cushion.

Goldberg learned acting from the teacher, Uta Hagen at the HB Studio. She made her debut in 1982 with a movie titled, “Citizen: I’m Not Losing My Mind, I’m Giving It Away.” Later, she wrote a show called, The Spook Show and Mike Nichols offered to take it to the Broadway and renamed it to Whoopi Goldberg which aired on HBO network.

Her performance in the theatre caught the attention of the director, Steven Spielberg who offered her the role of Celie Harris Johnson in the movie, The Color Purple. The movie based on the novel by Alice Walker received commercial and critical success which reprised Goldberg’s movie career. For the film, she was nominated for Best Actress at the Academy Awards and won the Golden Globe for Best Actress in 1986. Also, she won the Grammy Award in 1985 for the Best Comedy Recording for the show, Whoopi Goldberg: Direct from Broadway.

Later, she went on to win her first Academy Award for Best Supporting Actress in the movie, Ghost in 1990 and her second Golden Globe. She has been part of noteworthy movies like Sister Act 1 and 2, The Lion King, Toy Story 3, Teenage Mutant Ninja Turtles, Corrina Corrina, Nobody’s Fool, Boys on the side and so on.

Apart from her movie career, she also worked in the TV industry and is best known for her role as Guinan in the TV Show, Star Trek: The Next Generation. Other notable TV shows include Captain Planet and the Planeteers, The Whoopi Goldberg Show, Fox Busters, Good Fences, The Hollywood Squares and so on. 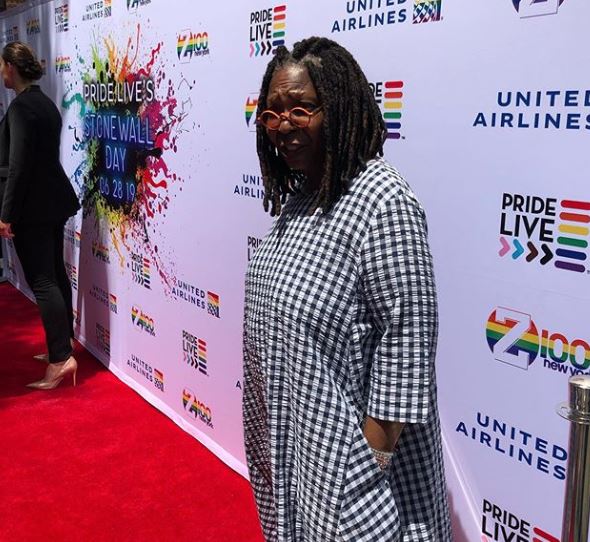 His popularity on TV Screens rose after she became the co-host of TV Show, The View replacing Rosie O’Donnell and raised the viewers by seven percent. With all these works up her sleeve, she has a net worth of around $45 million as per Celebrity net worth.

Goldberg achieved all there was to accomplish as an actress, but her personal life was not that prosperous. She got married thrice, but all marriages ended in divorce. During her interview with New York Time Magazine, she explained that she only got married because she thought it was expected of her.

In 1973, she got married to Alvin Martin and had a daughter Alexandra Martin. In 1979, they divorced, and she got married to David Claessen in 1986 only to divorce two years later. Her third marriage was with Lyle Trachtenberg in 1994, which did not even work for a year.

Goldberg grew up in Manhattan, New York to parents, Emma and Robert James Johnson. She had a brother named, Clyde who died of a brain aneurysm in 2015. Her father, Robert, was a Baptist clergyman, and her mother was a nurse and a teacher.

Goldberg stands with a height of 5ft and 5 inches and weighs 78kgs. She has black hair color with black eyes.