Aidy Bryant is a popular comedian who is best known for appearing in SNL since 2012. She has earned massive success and has been nominated for two Primetime Emmy Awards and won the award for Supporting Actress in a Comedy Series at the 2015 EWwy Awards. Aidy not only has a successful career but the comedian also rejoices at a happy married life. So, who is the lucky man to tie the knot with the beautiful actress?

Aidan Mackenzy Bryant was born in 1987 in Phoenix, Arizona. She celebrates her birthday on May 7, which makes her age 34. She holds American nationality and comes from a mixed ethnicity. The actress graduated from Xavier College Preparatory in 2005 and later from Columbia College with B.A. in 2009.

Aidy toured with the musical improv group Baby Wants Candy after she graduated. Likewise, she performed with IO Chicago, The Second City, and the Annoyance Theatre. Nonetheless, she had her breakthrough when she debuted as a featured player on Saturday Night Live in 2012. Aidy earned the promotion to a repertory player during her second season on the show.

Besides, the actress also had guest appearances on Broad City, Documentary Now!, The Awesome, and Girls. She also provided the voice in Danger & Eggs. In 2019, the actress starred in the Hulu series Shrill as the main character, co-writer, and co-executive producer. As of 2021, Aidy Bryant holds a net worth of $4 million. Most of her income comes from her appearance in SNL, as she has appeared in over 185 episodes.

Aidy is married to her amazing husband, Conner O’Malley. Her husband was a writer on Late Night with Seth Meyers. Nonetheless, the pair’s romance started when they first met at a theatre in Chicago in 2008, where they both performed. Later, they met at the IO theatre, and Conner asked Aidy for her number.

A few years later, the pair announced their engagement in 2016. Aidy might have the most wonderful experience with her husband as she shared,

“I had only had experiences with horrible mind games with men. But it was kind of perfect because I finally was like, that’s what I don’t want. I don’t want games or manipulation or trying to make each other jealous. I want full, comfortable honesty. And that is really what Conner and I have always had.”

Aidy and her husband tied the knot on April 28, 2018. Regardless, the duo has been maintaining a low-key profile after their wedding. We can assure you that the couple is together and, without a doubt, happy. Nonetheless, Aidy and her husband are yet to introduce a child.

Aidy was born to her parents, Georganna and Tom Bryant. Her mother is the owner of a boutique called Frances in Phoenix. Likewise, her father is of English, Irish, and German descent. The comedian also has a brother named Patrick Bryant. 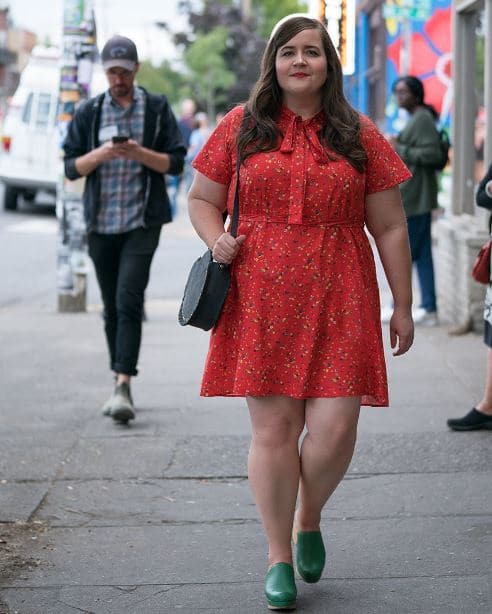 Likewise, she has light brown hair and blue colored eyes.