Known for his improvisation and comic presence, Dax Shepard had a turning point on his career with the hidden camera prank show “Punk’d”.  With his untamed comic proficiency in the show where he played practical jokes on unwitting celebrities made him an overnight sensation landing him numerous other projects and movies.  He is currently associated with Netflix Originals “The Ranch”.

Dax Shepard is an American Comedian, Television Actor, Podcast Host and Producer who has a huge fan following all due to his comic adaptation. With lots of struggle in his life, be it professional or personal, he has managed to resurface and established his name in the entertainment industry. Let’s learn more about his intriguing lifestyle.

Dax made his acting debut in 1998 from the movie named Hairshirt. Though he went unnoticed for years, the turning point in his career came when he was selected for the Candid Camera show “Punk’d”. He appeared in the show alongside Ashton Kutcher. He was associated with the show for many years i.e. from 2003 to 2012. This was just the beginning for him. He landed many more projects throughout this period which not only established his career but also provided him with a steady source of income. From 2010 onwards, he starred in another project “Parenthood” where his comic character was loved and appreciated by many. 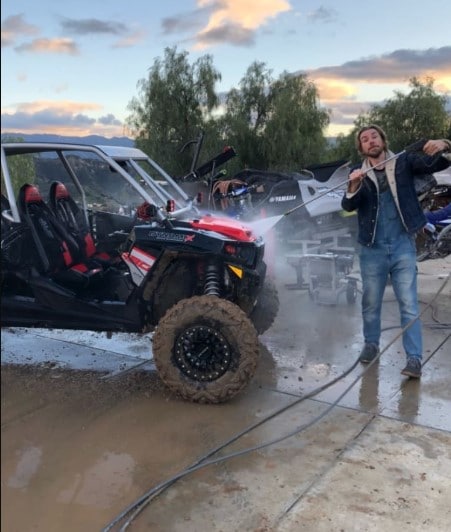 Acting is not his only source of income. Besides appearing in more than a dozen films and TV series he has also produced some projects. From February 2018, he initiated his own podcasts with co-host Monica Padman which went on to become the most popular podcast in iTunes in 2018. Considering his success, the whopping net worth of $12 million is not surprising at all. However, his regular income is under review.

Dax had been interlinked with many celebrities such as Kate Hudson and has often been criticized for such linkages. He had once mentioned,

“Here’s the funny thing about the response I’ve been aware of to my dating famous people; It’s been very negative. I’m either not good-looking enough, not a good enough actor or not successful enough for these people.”

Dax had met Kristen Bell, the love of his life, at a birthday party of a mutual friend in 2007. They hit it off then and started dating by the end of the year. They got engaged in January 2010 and after three years got married on 17 October 2013. They have two children together, named Delta Bell Shepard and Lincoln Shepard. Their relationship wasn’t without criticism though and it wasn’t especially easy for Dax having a famous girlfriend and later wife. He had once responded to the criticism saying

“It’s ironic, really. Guys should be excited I got Kristen Bell. If Brad Pitt gets Kristen Bell, its like, ‘Well, of course he did.’ With me, it should be, ‘Oh good, a normal-looking guy got her. Maybe I’ll get me a Kristen Bell.’ But guys hate my guts for always dating women I have no right to be with.”

Despite all, the duo is very happy together and their rapport is envied by many.

Dax was born to father Dave Robert Shepard, Sr. and mother Laura Labo. His father was a car salesman while his mother worked for General Motors. His parents had divorced when he was just three years old. Since his mother remarried three times, he has three stepfathers. His older brother is named David Shepard and he has a younger half-sister Carly Hatter who is also an aspiring actress.  As a child, he attended Muir Junior High and Walled Lake Central High School. He graduated from the latter in 1993. Later he joined UCLA and graduated from there with an Anthropology degree.

Dax stands tall at an impressive height of 6 feet and 3 inches and weighs around 88 kilos. His body measures 44-33-16 (Chest-Waist-Biceps) inches. Named the sexiest vegetarian celebrities by PETA, he strictly follows the vegan lifestyle. He has light brown hair and blue eyes.