Nicknamed the Blonde Bomber, Ebanie Bridges has been making headlines as she has held the ANBF Australasian female super-bantamweight title since 2020. Ebanie is a professional boxer and two times gold winner at the 2016 and 2017 Brisbane Bantamweight at the Australasian Golden Gloves.

Ebanie Bridges was born in 1986 in New South Wales, Australia. She celebrates her birthday on September 22, which makes her age 36. She holds Australian nationality and is White by ethnicity. Ebanie holds a Bachelor’s degree in Mathematics with a minor in Physical Education and a Master’s degree in Teaching. Likewise, she is also fluent in five languages.

Ebanie Bridges Net Worth and Salary

Ebanie was introduced to Karate by her parents when she was five years old. Later, she trained in Kickboxing and Muay Thai and discovered competitive boxing. She competed for eight years and won numerous regional and state titles.

From 2016-2018, she amassed a 26-4 record and won the 2016 and 2017 National Golden Gloves titles during her amateur career. She made her professional debut on February 8 2019, at the Horden Pavilion in Sydney against Filipino fighter Mahiecka Pareno, whom she defeated via majority decision.

She later fought Laura Woods in October 2019 and was defeated via TKO, and the following month, she defeated Kanittha Ninthim via second-round TKO. In 2020, the boxer signed a promotional contract with Split-T Management and made her U.S. debut on February 8 2020, winning a six-round unanimous decision against Crystal Hoy at the Hammond Civic Center in Hammond, Indiana.

On March 14 2021, it was confirmed that she would be facing Shannon Courtenay in a world bantamweight title showdown for the vacant WBA female bantamweight title. As of 2023, Ebanie Bridges net worth is estimated at $1 million.

With Ebanie defeating almost everyone she faces in the ring, the boxer has earned massive popularity for her impressive boxing skills. Likewise, many of her fans are interested in the fighter having someone supporting her outside the ring.

If you were not aware, Ebanie was in a relationship with her ex-boyfriend before. She featured her boyfriend and parents on her social media on May 22, 2021, with a lengthy caption that read,

“No one really knows/sees/understands the sacrifices I make to be where I am,”

“I’ve lost count at the amount I’ve made over the years with zero return at the time.”

However, she is no longer together with him. As of 2023, Ebanie Bridges is single.

Ebanie Bridges was born to Australian parents. Although she has not revealed much about them, she has featured them on social media. Likewise, she is the youngest of her three siblings and has a twin brother who is older by six minutes. 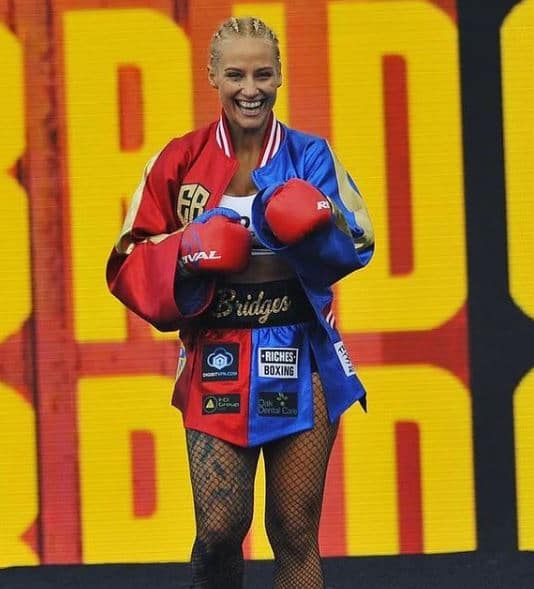 Ebanie stands at the height of 5 feet 1 inch. Likewise, she has a stunning and fit body and weighs around 53 kg.

How old is Ebanie Bridges?

Where is Ebanie Bridges from?

What languages does Ebanie Bridges speak?

Who is Ebanie Bridges partner?

Ebanie Bridges is rumored dating Kell Brook, but is not confirmed.

Who is Ebanie Bridges husband?

Ebanie Bridges is not married and does not have a husband.

What is Ebanie Bridges net worth?

How tall is Ebanie Bridges?