Hannah Aylward is a famed YouTube star who gained recognition for her relationship with Shane Burcaw who is wheelchair-bound since the age of two because of a genetic disorder. The duo is famous for their collaborative YouTube channel ‘Squirmy and Grubs,’ where they document their interabled relationship.

Originally from Minneapolis, Minnesota, Hannah Aylward was born on 12 December 1995 under the star sign Sagittarius. The 25-year-old YouTuber is American by nationality and belongs to Polish ethnicity. She graduated from Carleton College in 2019.

As an avid competitive swimmer, Aylward was on the varsity swimming team during her time in college. Later, she began working at a retail store and even worked as a dog sitter and dog walker. 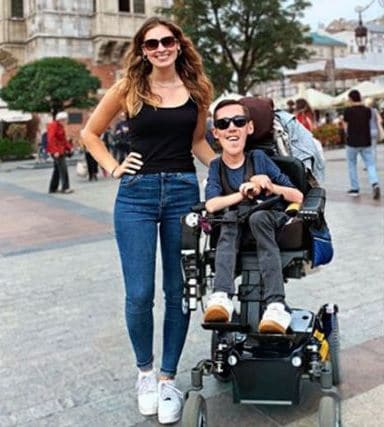 After Aylward began dating her partner Shane, the duo started a collaborative YouTube channel Squirmy and Grubs in June 2018. On 19 June 2018, the couple uploaded their first video of a road trip from Minneapolis to Pennsylvania entitled ‘Shane takes a bath in the hotel pool,’ which has now amassed over 563k views.

To the date, Aylward has uploaded almost 300 videos on YouTube and has successfully managed to amass 772,000 subscribers. Besides YouTube, she also generates income from promoting various products like T-shirts, Sweatshirts, Tote Bags, and much more. As of 2020, Aylward has an estimated net worth of $300 Thousand.

Aylward is now happily married to her longtime partner Shane Burcaw. She has even changed her name from ‘Aylward’ to ‘Burcaw’ on her social profiles. Her husband, Burcaw, has a disability as he was born with spinal muscular atrophy.

Aylward started dating her now-husband, Burcaw, in 2016. She initiated the outreach after watching a documentary by Rainn Wilson on Burcaw. Their YouTube channel provides much insight through their four years of a dating relationship.

After documenting their interabled relationship for four years, the lovebirds tied the knot on 04 September 2020 in an intimate backyard wedding ceremony that was officiated over Zoom. They shared their wedding video on YouTube and expressed how thrilled they were to become husband and wife finally.

While the children are certainly on the horizon, the duo is now enjoying their time as a married couple.

The famed YouTuber was born to parents Liz and George Aylward. Her father, who is originally from Brooklyn, New York, works as a consultant. And, her mother, Liz studied at Stevens Institute of Technology and later enrolled in CUNY College of Staten Island.

Aylward is one of three children of her parents. She grew up with two brothers. One of her brother’s name is Mike.

Aylward is one of the luckiest daughters to have supportive parents. Her parents always supported her decision of choosing Shane as her life partner.

Aylward stands at an average height of 5 feet 8 inches. She has a perfect physique, and she weighs around 59 kg. Her blonde hair and black eyes add more to her beauty.