Elle Bielfeldt is perhaps best known as the wife of the Miami Heat basketball player, Meyers Leonard. However, Elle does not prefer to live in the shadow of her husband and is an entrepreneur. She has started various brands and is also popular on social media with hundreds of followers.

Elle Bielfeldt was born in 1992 in Peoria, Illinois. She celebrates her birthday on January 15, which makes her age 29. She holds American nationality and comes from White ethnicity. Elle graduated from the University of Illinois at Urbana-Champaign.

Elle might have been earning attention as a wife of an NBA star but don’t mistake her for a dependent housewife. She is an entrepreneur. Elle is a co-founder of the Meyers Leonard brand, apparel, and lifestyle brand. Besides, she also founded Level Foods, a protein bar business, in 2018. The inspiration for Level Foods comes after she found her husband struggling to sleep and recover from basketball training. 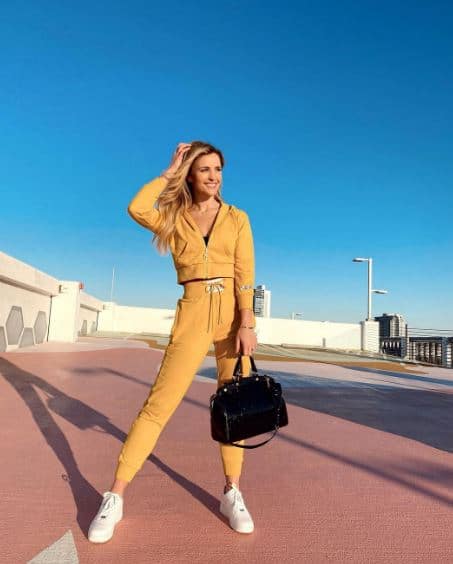 Elle has been long time married to Meyers Leonard. The pair started dating in 2011 when Elle was 19 years old.

She also celebrated her 10-year anniversary with Meyers on 2021 Valentine’s Day sharing a throwback picture of the couple. She wrote,

“When your 19 year old sweetheart is the same as your 29, I really couldn’t ask for a better Valentine “

Nonetheless, the pair tied the knot on August 3, 2015. She also celebrated the duo’s 5th anniversary sharing a picture of their wedding and an adorable caption that read,

“And today on our 5th anniversary, I feel lucky that we’re still laughing and looking at each other just like we did in this moment.”

Regardless of being together for a decade, Elle and her husband do not share any children at the moment.

Meyers Leonard’s wife, Elle has a height of 5 feet and 10 inches. As Elle is very much into fitness, she has a well-maintained fit body. Likewise, she possesses blue-colored eyes and blonde colored hair.