Ja’Marr Chase is the new player to be playing as the wide receiver for the Cincinnati Bengals of the NFL. He comes from a successful college career with the LSU Tigers, where he was a Fred Biletnikoff Award-winner and unanimous All-American who led the Football Bowl Subdivision in receiving yards and touchdowns en route to a National Championship in 2019. However, the young NFL player has already been involved in a few controversies with his girlfriend.

Ja’Marr Anthony Chase was born in 2000 in Harvey, Louisiana. He celebrates his birthday on March 1, which makes his age 21. He holds American nationality and comes from African-American ethnicity.

During Ja’Marr’s high school career, he had 115 receptions for 2,152 yards and 30 touchdowns. He committed to play for LSU, and as a freshman in 2018, Ja’Narr played all 14 games with 8 starts. He was a starter in 2019 and led the team with 1,780 years on 84 catches and receiving touchdowns. Moreover, Ja’Marr was awarded the Fred Biletnikoff Award as the best receiver in the regular season.

The Cincinnati Bengals fifth overall drafted Ja’Maar in the 2021 NFL Draft. He signed a four-year rookie contract worth $30.8 million on June 2, 2021. Likewise, he is also the first player in the franchise to wear number 1 after new NFL uniform number roles were implemented in 2021. As of 2021, Ja’Maar’s net worth is estimated to be near a million, considering the worth of his contract.

Ja’Marr might be looking at a bright career ahead. However, his dating life at the moment seems to be going in the opposite direction. The NFL player is in a relationship with an Instagram model, Ambar Nicole. Although she does not upload pictures with her boyfriend, she shocked everyone through her Instagram story on August 24, 2021. The model alleged her boyfriend of abuse.

“Told myself I wouldn’t put my business on the media anymore but!!…”

“putting your hands on a pregnant female is lame af!!! @Lahjay10_“., she added on her second post.

Although Ja’Marr’s girlfriend admitted being pregnant on social media, it’s not clear how far along she might be. The model tagged Ja’Maar on her third story with the picture of him reading a stain word. His girlfriend deleted all her post except one, on which she pinned a comment that read,

“Y’all wrong for attacking her. Keep defending the probably abusive NFL player just because he’s good at catching a ball but sure, destroy a soon-to-be mom’s confidence and mental health just because you’re stuck in last century. Stay strong Ambar!”

Moreover, she has also claimed that the NFL player has been unfaithful during their relationship. On the other hand, Ja’Marr has publicly acknowledged or confirmed the pair’s relationship or his girlfriend’s pregnancy.

Ja’Marr Chase was born to his father, Jimmy Chase Sr., and mother, Toeleah Smith Chase. His parents have supported his career all the way.

“That’s the most fulfilling part. To have your child or your son set some goals for himself and actually reach some of those goals, doing what he loves to do; it’s a beautiful thing, life-changing thing.

“It’s a blessing, and I’m so pleased with Ja’Marr. He is setting all of his goals and reaching them. Just to be a finalist. Even if he doesn’t win, that’s still good. That means he’s awesome,”, his mother had shared. 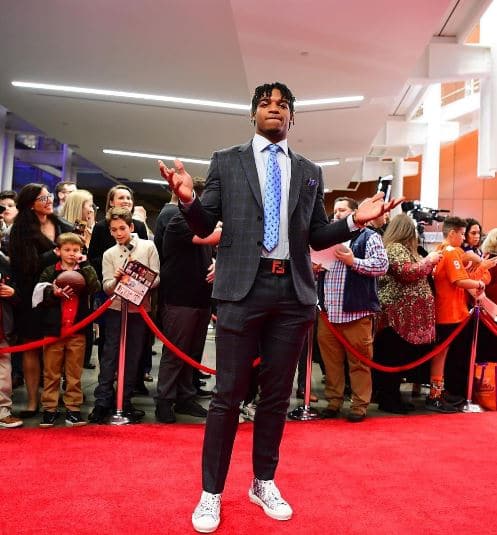 Ja’Maar stands at a tall height of 6 feet and 1 inch. Likewise, he possesses an athletic body that weighs around 91 kg.