Joe Keery is an American actor and musician who gained global recognition after portraying Steve Harrington in the American science-fiction horror television series Stranger Things. Besides being one of the guitarists of Post Animal, he has also worked as a solo artist and has released a few singles and an album.

Originally from Newburyport, Massachusetts, Joe Keery was born on 24 April 1992 under the star sign Taurus. The 28-year-old actor is American by nationality and belongs to white ethnicity. He attended River Valley Charter School and Newburyport High School. In 2014, he graduated with a Bachelor of Fine Arts in Acting at The Theatre School at DePaul University.

Keery is best known for playing the role of Steve Harrington in the horror web series Stranger Things. Besides, he is a contributing musician for the psychedelic rock band Post Animal. He’ll next be seen in the upcoming movie Free Guy. 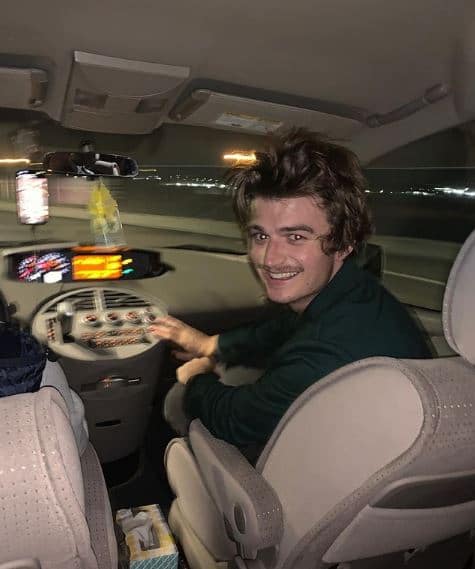 Keery kicked off his acting career in 2015 with Stephen Cone’s Indie film Henry Gamble’s Birthday Party. The same year, he appeared in an episode of the television series Sirens and also had roles in Empire and Chicago Fire. Since then, he has starred in several films and TV series such as Molly’s Game, Slice, After Everything, Spree, No Activity, and Death to 2020.

Keery has earned a colossal net worth from his acting and music profession. He has established himself as one of the uprising actors of Hollywood. As of December 2020, he has accumulated a hefty net worth of $2 million.

Keery is currently in a long-time relationship with fellow actress Maika Monroe. The couple is fairly private about their relationship online. However, they have been in a romantic relationship since late 2017.

Keery met Monroe on the set of the film After Everything. They quickly hit it off but opted to keep their relationship low-key until the premiere of the 2nd season of Stranger Things in October 2017.

Since then, the couple has frequently walked red carpets together but has remained completely silent about the details of their relationship. The two are seemingly happy as they can be and seem to truly get along.

The Stranger Things actor was born to parents David and Nina Keery. His father, David, is an architect, while his mother, Nina, is a Professor of English by profession. He is the second child and the only son of his parents. He grew up with four sisters, namely Caroline, Kate, Lizzy, and Emma.

Keery stands tall at the height of 5 feet 11 inches. He has a fit, healthy body that weighs around 65 kg. His dark brown hair and hazel eyes provide a perfect complement to his charming personality.