Julissa Bermudez is a TV host, actress, model, and dancer who has hosted many popular TV shows, including Bet’s 106 & Park and Jersey Shore: After Hours. Likewise, she also co-starred in her own reality series, Empire Girls: Julissa and Adrienne. Besides, she has also been earning huge attention for her recent role in the series, Hunters.

Julissa Bermúdez was born in 1983 in Santo Domingo, Dominican Republic, and was raised in Queens, New York. She celebrates her birthday on September 8, which makes her age 37. She holds American nationality and comes from Latina ethnicity.

Julissa started pursuing a career as a student and started her professional career with a Coca-Cola commercial. At the same time, she also started modeling as well. Likewise, Julissa found success as a host of shows such as The Roof, 106 Park, and The Center. Besides, she also hosted Jersey Shore: After Hours.

Besides, she also pursued an acting career and made her film debut in The Wannabe in 2006. Later, she appeared in movies like All You’ve Got, Make It Happen, Sara, and Danger One. Her other show appearance as an actress includes Royal Pains, Z Rock, and Rescue Me. In 2020, she starred in Hunters as Maria de la Ruiz. AS of 2021, Julissa holds a net worth of $600k.

Unlike many celebrities, Julissa’s relationship status is quite complicated. The host was linked to her friend, Maxwell, an American singer-songwriter. The pair were suspected of dating in 2011, but Julissa denied the rumors mentioning Maxwell as her friend. However, in 2014, the pair were spotted together on the beach in Miami closer than friends. In 2016, the pair finally opened up on their relationship and attended the 2016 BET Awards. However, their relationship became a big question mark when Julissa talked about the relationship in 2018.

In the interview, she mentioned that Maxwell and Julissa had been friends for over a decade, and she valued the friendship. Moreover, she also mentioned that she was not sure about their romance. Julissa and Maxwell’s love story eventually phased out, and the couple might not be together as they have not been spotted together for a long time. Before, Julissa had been in a relationship with Quentin Richardson, Charlie Villanueva, and Larry Johnson. Julissa was also rumored to have been engaged to Larry Johnson. Regardless, Julissa is assumed to be single at the moment.

Julissa has not shared much about her parents. The TV host has also not featured her parents on her social media. Besides, there is no information on her siblings, if she has any.

The stunning TV host has a height of 5 feet and 6 inches. 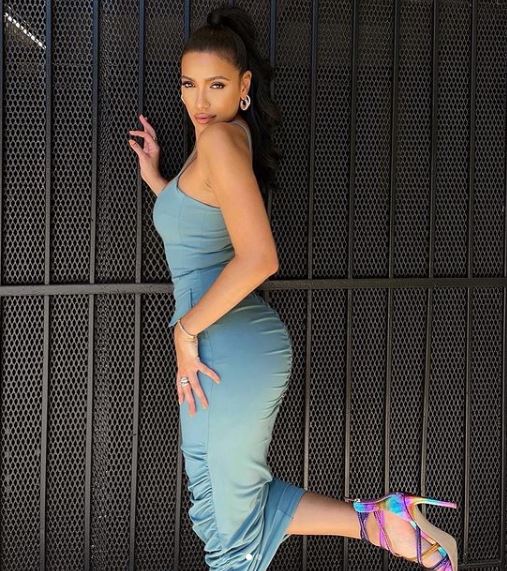 Likewise, she has a stunning curvy body. Her facial feature includes her black-colored hair and eyes.