Mitch Trubisky is a famous NFL player who plays quarterback for the Chicago Bears. He was drafted by the Bears in the 2017 NFL Draft with the second overall pick. Previously, he played college football at North Carolina.

The 26-year-old Mitchell Trubisky was born on 20 August 1994 in Mentor, Ohio, the U.S.A.  He is American by nationality and belongs to the white ethnic group. The Chicago Bears’ star attended Mentor High School. Later, he committed to the University of North Carolina at Chapel Hill. His birth sign is Leo.

Trubisky started his professional career after the Chicago Bears drafted him in the 2017 NFL Draft. In the 2017 regular season, he was named back up to Mike Glennon. His rookie season ended with a 4-8 record in 12 starts, seven interceptions, and seven touchdown passes.

On 21 January 2019, Trubisky was named a Pro Bowl participate that made him the first Bears quarterback since Jim McMahon to be named to the Pro Bowl. He recorded 3,138 passing yards, ten interceptions, and 17 passing touchdowns in the 2019 season. 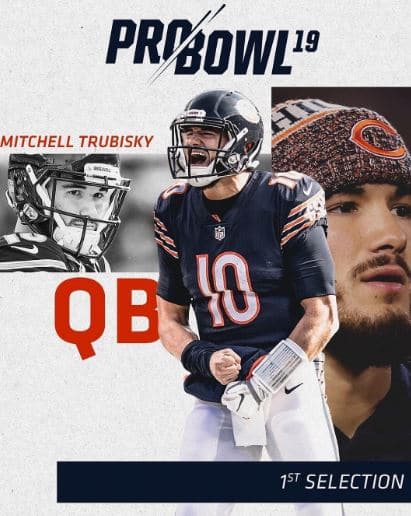 In the 2020 season opener, Trubisky started off slow against the Detroit Lions as he completed eight passes on the total of 20 attempts for 110 yards in the first half. During the final period, he scored 21 unanswered points, completing eight of ten passes for 89 yards and three touchdowns and led the Bears for the 27-23 victory.

On 27 November, the Chicago Bears named Trubisky as the starter for the game against the Green Bay Packers. He completed 26 of 46 passes for 242 yards, two interceptions, and three touchdowns.

Trubisky is already taken as he is dating Hillary Gallagher. He made his relationship with girlfriend Gallagher Instagram official during the 2019 offseason. His girlfriend graduated with a Marketing degree from Florida State in fall 2019.

The NFL star made the first reference to his relationship with Gallagher on 19 May 2019, posting pictures with her from the Bears Gala that took place at Soldier Field.

Before Trubisky made his relationship with Gallagher Instagram official, she had already posted a photo with the Bears quarterback on 24 February 2019 at an event in Cleveland, Ohio. Later, his girlfriend also uploaded pictures of their vacation in Turks and Caicos Islands. They even took a trip together to San Diego in April.

The Chicago Bears’ star was born to parents Dave and Jeanne Trubisky. His parents were also sportsperson during high school. His mother Jeanne played four sports in high school while his father Dave participated in three.

It was Trubisky’s family who supported and helped him realize his NFL dreams. He has three siblings- two brothers and a sister. His both younger brothers Manning and Mason played wide receiver at Mentor High School. His brother Manning also played wide receiver at John Carroll University. Meanwhile, his sister, Mariah, played basketball at Mentor. 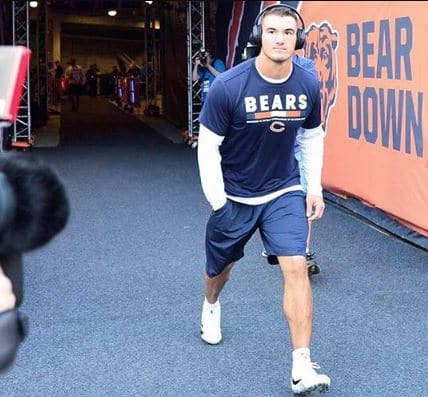 Trubisky is blessed with a tall height as his height measures 6 feet 2 inches. As an athletic person, he has a fit physique, and his body weighs about 215 lb.