Nic Kerdiles became a hot topic for media when he was engaged to the reality star Savannah Chrisley and once again when they called off their wedding. He is a professional ice hockey forward but is currently an unrestricted free agent. Now, he is a successful real estate agent who works for the company Compass.

Nicolas Kerdiles was born in 1994 in Lewisville, Texas. He celebrates his birthday on January 11, which makes his age 27. Likewise, he holds American nationality and comes from White ethnicity. Nic attended the University of Wisconsin-Madison.

Nic started his career as an ice hockey player and played in the 2007 Quebec International Pee-Wee Hockey Tournament. He also played two seasons of NCAA Division I Hockey at the University of Wisconsin-Madison. He was selected by the Anaheim Ducks in the 2012 draft. In 2014, he relinquished his final two seasons of NCAA eligibility to sign a three-year entry-level contract with the Anaheim Ducks. 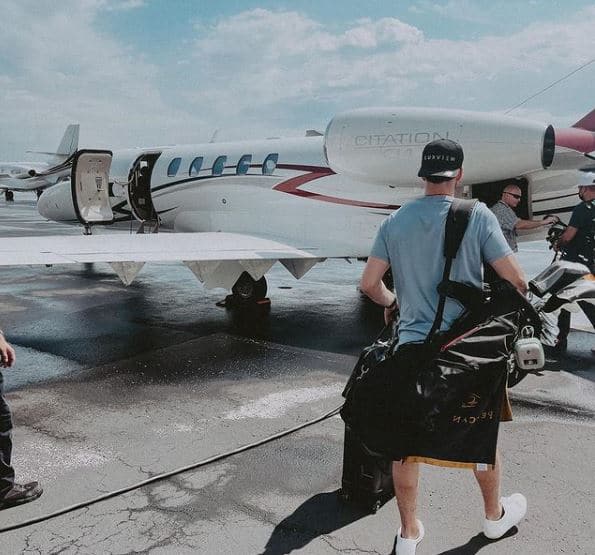 He made his professional debut during the 2014 Calder Cup playoffs. He re-signed for a one-year, two-way extension worth $650,000 in 2017. He was later traded to the Winnipeg Jets in 2018 after which he signed a one-year, two-way contract with the Jets in 2018. Although he is listed as an unrestricted free agent, he no longer plays in the NHL. Besides, he is also a licensed realtor based in Nashville, Tennessee. As of 2021, Nic Kerdiles is estimated to hold a net worth of $2 million.

Nic’s dating life came into the highlight when he was dating the Chrisley Knows Best star, Savannah Chrisley. The couple connected through Instagram and started dating in November 2017. Likewise, they were also engaged a year later on December 24, 2018. However, a year later, Nic’s fiancé shared that they were “taking some steps back,”.

However, by June of 2020, many speculated the couple to have split up. In September of the same year, both of them confirmed their split on social media. Since Nic’s split, the former NHL player has not been spotted with anyone. He seems to be much focused on his real estate career at the moment.

Nic Kerdiles was born to his parents, Nathalie De Larminat-Kerdiles and Michel Kerdiles. Besides, he also has a sister who goes by the name Marine Kerdiles.

Nic Kerdiles stands at a height of 6 feet and 2 inches. He possesses a muscular and well-maintained body which weighs around 89kg. Likewise, he has dark brown eye color and dark brown hair color.