Tim Tebow is an NFL player and former baseball player. He initially played football for the Denver Broncos and New York Jets before starting a brief baseball career. He played minor league baseball as an outfielder for New York Mets and returned to NFL as a tight end for Jacksonville Jaguars.

Timothy Richard Tebow was born in 1987 in Makati, Philippines. He celebrates his birthday on August 14, which makes his age 33. Tim holds American nationality and comes from White ethnicity. He attended the University of Florida on an athletic scholarship.

Tim started his NFL career after the Denver Broncos selected him in the first round of the 2010 NFL Draft. He was a great addition to the Broncos as they started winning with him in the field. Moreover, the team also won their first AFC West title and first playoff game since 2005. Later, he was traded to the New York Jets during the offseason, and he was released on April 29, 2013. He signed a two-year non-guaranteed contract with New England the same year before being cut in August. 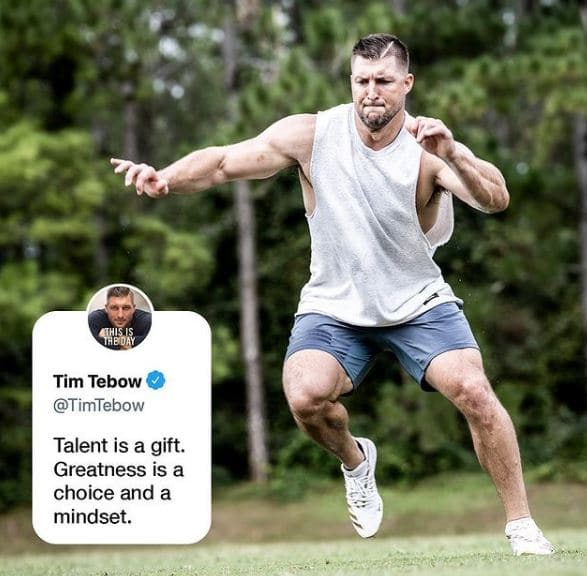 The same year, he was hired by ESPN as a college football analyst. In 2015, he signed a one-year contract with the Philadelphia Eagles but was released in September. In 2016, Tim announced that he would pursue a baseball career. He was assigned to the Scottsdale Scorpions, and in 2018, he was invited to Major League camp with the Mets, and they promoted him to their Double-A team. However, he retired from baseball and resurrected his career in football, signing with the Jacksonville Jaguars in 2021. As of 2021, Tim Tebow holds a net worth of $5 million.

Tim is married to the beautiful 2017’s Miss South Africa and Miss Universe, Demi-Leigh Nel-Peters. The pair started dating in 2018 and were engaged on January 10, 2019, after Tim proposed to her at his family’s farm outside Jacksonville, Florida. According to PEOPLE, the NFL Player asked,

The pair exchanged their vows in an intimate sunset ceremony with 260 guests present. Moreover, the NFL tight end also celebrated his first anniversary sharing picture with his wife writing,

“A year ago today, this is the moment my life changed forever. After years of prayer, God gave me you @DemiTebow. I’m so grateful you’re in my life, that you chose me, and that we get this lifetime alongside eachother.”

The pair are yet to introduce children as of now.

Tim was born to his parents, Pamela Elaine and Robert Ramsey Tebow II. Their parents met while attending the same University and tied the knot on June 12, 1971. Moreover, Tebow is the youngest of five siblings, Katie, Robby, Peter, and Christy.

Tim has a height of 6 feet and 3 inches. As an athlete, Tim has a muscular and fit body and weighs around 111 kg. Likewise, the NFL player possesses Blue colored eyes and brown-colored hair.