Jessica Fox is a slalom canoeist who has competed at the international level since 2008. Likewise, she has been making headlines for winning bronze and gold at the 2020 Tokyo Summer Olympics. However, what made her more famous was the fact that she used a condom to repair her kayak and won bronze in the women’s canoe slalom K1. Jessica has been making front-page as she wins her first gold medal at the Olympics.

Jessica Esther “Jess” Fox was born in 1994 in Marseille, France. She celebrates her birthday on 11th June, which makes her age 27. She holds Australian nationality and comes from a mixed ethnicity.

Jessica started in 2005 canoeing on the Nepean River. In September 2009, she made her Australian senior national team mid and competed at the ICF World Ranking in Italy. She finished third in the K1 event and first in the women’s K1 event. Likewise, she won a bronze medal in the C1 event at the 2010 ICF Canoe Slalom World Championship in Race and won gold in the girl’s K1 slalom event at the Summer Youth Olympics. In 2012, she was selected to represent Australia for the first time at the Olympics in the women’s K1 event. She won a silver medal at the age of 18. 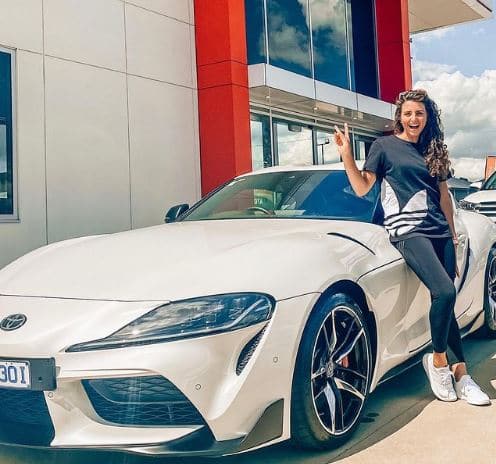 Likewise, in 2016, Jessica won her second Olympic medal, with a bronze in the K1 in Rid de Janerio. She won the overall title in the 2016 World Cup Kayak Single Slalom K1 and also the World U-23 Championships in Kayak Slalom and Canoe Slalom in Poland. She has won the overall World Cup title five times and twice in the K1 class. Moreover, she finished third and won a bronze medal at the 2020 Tokyo Olympics in the women’s canoe slalom K1. Likewise, she won a gold medal at the Women’s C-1 event. As of 2021, Jessica Fox’s net worth is estimated to be in the thousands.

As Jessica wins the gold medal for her country, she surely has earned many fans. Likewise, there has also been interest in her dating life. Jessica is dating her French boyfriend named Matthieu Biazizzo. Her boyfriend is also a paddler but failed to qualify for the games. At the same time, there is not much information on when the duo started dating; their pictures on social media date back to 2015.

Jess was born to her parents Richard and Myriam. Both of her parents competed as canoeists at the Olympics.

Her mother had won a bronze medal for France. She also has a younger sister named Noemie, a slalom canoeist.

Jessica Fox has a height of 5 feet and 5 inches. Likewise, she has an athletic slim body that weighs around 63 kg. She possesses light brown hair and blue-colored eyes.