Jim Lehrer was a news anchor and executive editor for the PBS NewsHour on PBS for 36 years. He was also a debate moderator in the U.S Presidential election campaigns which gave him fame and attention from the public.

Jim Lehrer was born on 19 May 1934 in Wichita, Kansas, the U.S. he died at age 85 in Washington, D.C. He held an American nationality and white ethnicity. Moreover, his parents were Lois Catherine and Harry Frederick. Talking about his education, Jim graduated from Thomas Jefferson High School and then garnered an associate’s degree from Victoria College. He even had a bachelor’s degree in Journalism in 1956 from the Missouri School of Journalism.

The former news anchor for PBS NewsHours, Jim Lehrer died aged 85 on 23rd January 2020. According to PBS, he died peacefully in his sleep at home but didn’t share the information about his death cause.

On his death, anchor and managing editor, Judy Woodruff mourn by saying,

“I’m heartbroken at the loss of someone who was central to my professional life, a mentor to me and someone whose friendship I’ve cherished for decades,”

“I’ve looked up to him as the standard for fair, probing and thoughtful journalism and I know countless others who feel the same way.”

“JIM LEHRER RIP.  This man changed news so much for the better.  So grateful to be part of Jim Lehrer’s legacy. Very sad he is no longer in the world.  But, suspect Jim Lehrer would just tell us to move on and cover the story.”

Previously, Jim had suffered from a heart attack in 1983. In April 2008, He even had to undergo heart valve surgery.

However, Jim’s family hasn’t shared news about the funeral. We will be updating Jim Funeral after his family shares the detail.

In 1959, Jim started his journalism career from The Dallas Morning News in Texas. There, he had covered John F. Kennedy’s assassination in 1963. Afterward, he served several years as a Political Columnist and worked as the City Editor since 1968.

Eventually, Jim began his TV career by working at the KERA-TV in Dallas. He had worked as an On-air host, editor of a nightly news program and as the Executive Director of Public Affairs. He even began working as a member of the Journalism Advisory Board, a Fellow at the Corporation for Public Broadcasting and Public Affairs Coordinator at PBS in Washington. During that time, he met Robert MacNeil and covered the revelation of the Watergate tapes and Senate Watergate hearings. 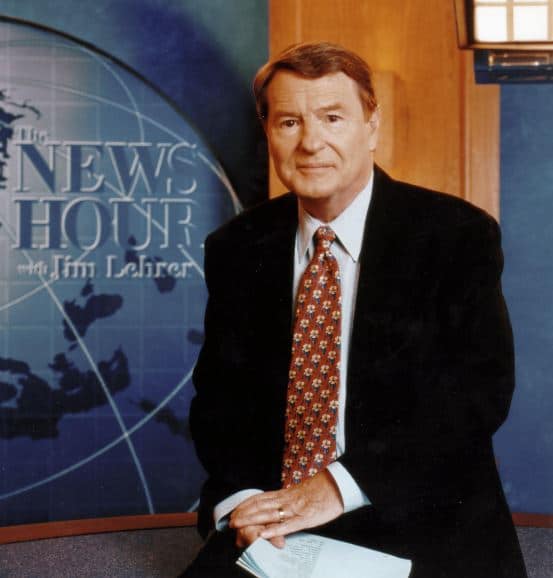 Jim also appeared as a correspondent on Thirteen/WNET New York for Robert and after two months he got promotion for co-anchor. Together, they launched a show called The MacNeil/Lehrer NewsHour, but later renamed as NewsHour. In 2009, the show got another name called PBS NewsHour. Later in 2011, Jim resigned from his position but didn’t stop the Friday news analysis segments. Moreover, he was involved in MacNeil/Lehrer Productions show.

Nevertheless, Jim has also earned several awards like an honorary Doctor of Journalism degree by McDaniel College and Emmys. Therefore, Jim’s net worth had estimated at $3 million and his salary could be ranged in between $ $72,878-$79,088.

Before his death, Jim was a married man. He had shared a wedding oath with his wife, Kate Lehrer in 1960. From his marriage, the pair have welcomed three children, daughter; Lucy, Jamie, and Amanda and grandparents of six. Also, they are living for many years in the Cleveland Park neighborhood of Washington D.C.

His wife is native of Waco, Texas worked as a novelist and teacher. She also graduated from Texas Christian University and comes from the social worker’s family background. His wife has also published four novels which include Best Intention.

Jim was born in the Lehre family and possessed a white ethnical background. He was the son of Harry Frederick Lehrer and Lois Catherine. His mother had worked as a bank clerk and his father was a bus station manager.

Jim Lehrer’s height and weight haven’t been known to the public. But, he had blonde hair and black eye color.