Lola Lennox is a singer, songwriter, and model popular for her singles, Pale and In the Wild. Besides, Lona also comes from a family of celebrities as her mother is a popular singer while her sister is a fashion model. Lona is turning heads with her music, but she is only starting her musical journey.

Lola Lennox Frutchmann was born in 1990 in London, United Kingdom. She celebrates her birthday on December 10, which makes her age 30. She holds British nationality and comes from mixed ethnicity of Scottish and Israeli.

Lola started her career after studying classical singing. She signed with XIX Entertainment and first performed alongside Clara at Vouge’s Fashion Experience Dubai in 2014. Likewise, she first appeared live on TV alongside her mother and performed vocals in the PBS concert special in 2015. In 2019, the singer sand and co-wrote songs for the BBC/Discovery Channel docu-series soundtrack. 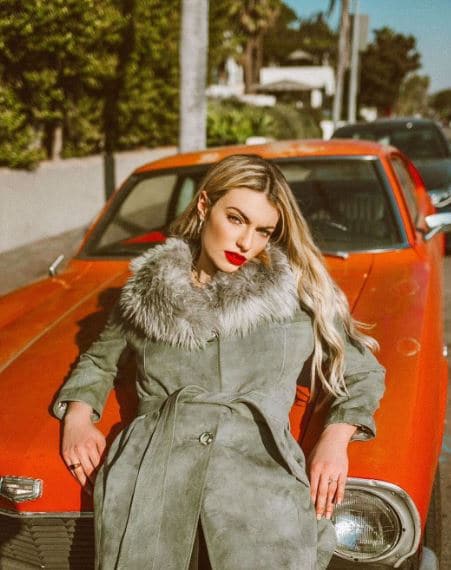 Lola released her debut single, ‘In the Wild”, on February 7, 2020. In April 2020, the singer performed a duet with Annie Lennox for the historic One World: Together at Home. Likewise, her second single, ‘Pale,’ was released on April 17, 2020. The song received positive feedback, and the video for the song was released on Vevo on May 27, 2020. Moreover, the singer also released her third single, “Back At Wrong,” in July 2020. Apart from singing, Lona has also modeled and has appeared in Teen Vogue in 2008, followed by the Vanity fair. She was also featured in the Spring/Summer 2100 campaign for Topshop. As of 2021, Lona Lennox’s net worth is estimated to be in the thousands.

Lola has not only charmed her fans with her music, but she has also grabbed many attentions with her stunning beauty. To those interested, Lona is already taken by her boyfriend, Braeden Wright, a Canadian model. The pair are in a pretty serious relationship as they have stayed together for over three years.

The pair started dating in November of 2017. However, they made their relationship IG official in February of 2018 on the occasion of Valentine’s Day. Moreover, the singer also celebrated the duo’s third anniversary, sharing a couple of pictures with the caption reading,

“Three years with you”

“You brought me back to who I was, before the cracks of life had time to burrow into my skin.”

Lola resides in Los Angeles with her boyfriend. Although they have shared no plans on tying the knot, it might not be long before we hear the couple engaged.

Lola was born to her parents, Annie Lennox and Uri Frutchmann. Her mother is a Scottish singer and former Eurythmics lead vocalist, while her father is an Israeli film producer.

Her parents raised her alongside her sister, Tali Lennox. Lola’s parents divorced in 2000, and her mother remarried an American doctor Mitch Besser.

The beautiful singer, Lola Lennox, stands at the height of 5 feet and 10 inches. Likewise, the singer has a well-maintained slim body. Moreover, her facial feature includes blonde hair and brown colored eyes.