Multi-hyphenate Marie Kondo is a renowned tidying expert, bestselling author, and TV personality. She is the founder of her lifestyle brand and consultancy called KonMari Media, Inc. Besides, she is the star of the Netflix shows “Tidying Up With Marie Kondo” and “Sparking Joy With Marie Kondo.”

Originally from Tokyo, Marie Kondo was born on 9 October 1984 under the star sign Libra. The 36-year-old organizing consultant is Japanese by nationality and belongs to the South-Asian ethnicity. She studied sociology at Tokyo Woman’s Christian University.

Kondo has been interested in organizing since childhood. She started her tidying consultant business as a 19-year old university student in Tokyo. Following her years of research and experience, she created a unique approach to tidying called ” The Konmari Method.” 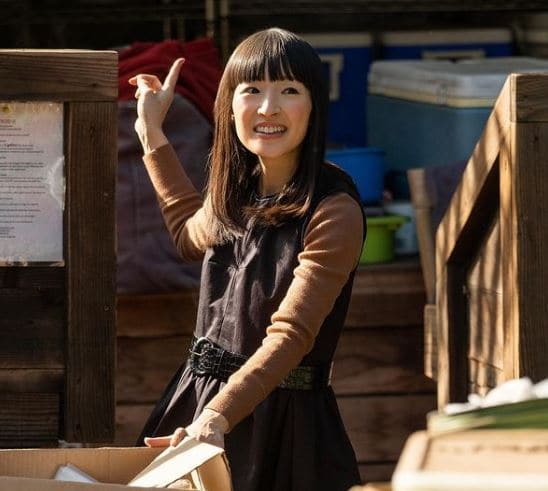 The tidying expert has authored nine books on tidying and organization. Her first book, “The Life-Changing Magic of Tidying Up,” has sold more than 13 million copies worldwide and translated into 44 languages. She has been featured in several renowned magazines, including Vogue Magazine, The Wall Street Journal, The London Times, and The New York Times.

Kondo has also appeared in several TV shows, notably in Jimmy Kimmel Live! and The Late Show with Stephen Colbert. Her first TV show, Tidying Up With Marie Kondo, was released on Netflix in 2019. The show earned her 7 award nominations, including 2 Emmys and 3 Critics Choice Awards. In 2021, she came up with a new series on Netflix, Sparking Joy With Marine Kondo, which was launched on 31 August.

The Japanese queen of clean has built a multimillion-dollar empire from her tidying business, bestselling books, and Netflix shows. As of 2021, she has amassed a US $8 million net worth.

Kondo is happily married to her husband, Takumi Kawahara. The two tied the knot in 2012. The lovey-dovey couple shares three children – two daughters, Satsuki and Miko, and a newly born son. Their son was born on 22 April 2021. The family of five live in Los Angeles, California.

Kondo’s husband was working in sales support and marketing at a corporation in Osaka when they first met. After Kondo’s career took off, her husband left his job and became her manager. Eventually, Kawahara became CEO of Konmari Media, LLC.

The best-selling author hasn’t unveiled her parents’ name. But she revealed that she’d often clean her childhood home while her parents were away. In her youth, she was very close with her grandmother, Noriko. Her grandmother’s effortless tidying and considerate regard for her home inspired Kondo to live with intention and care.

Kondo grew up alongside her two siblings – a brother and a sister.

Kondo has a petite body, and she stands only 4 feet 8 inches tall. She has a slim, fit body that weighs around 49 kgs. She has black hair and dark brown eyes.